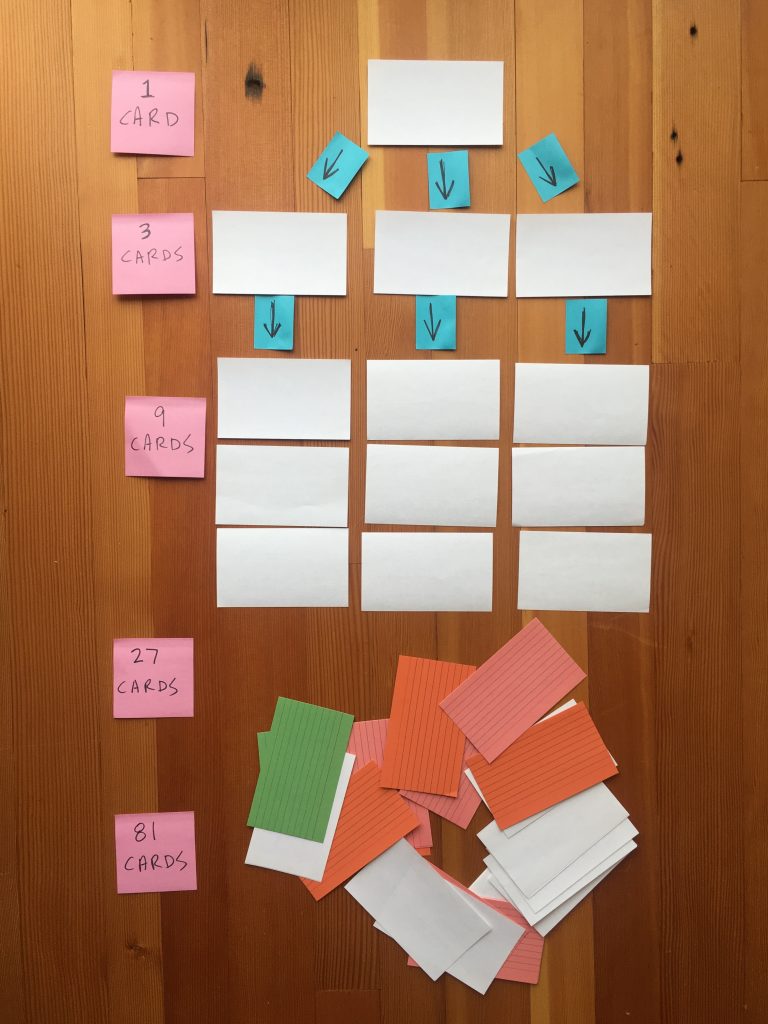 I just sent my editor a very early version of Book 6. While she’s reading it and making her notes, I thought I’d start to mull over Book 7.

This is just one of many methods I might use to start a novel. I didn’t invent it–I believe this is actually a screenwriting technique. Here’s how it works:

Start with one index card. Write the premise of the novel in just one line. It might be something like, “An ordinary boy discovers he’s a wizard and goes off to wizarding school.” (If you’re not sure how to sum up your story in one line, read the one-liners in the New York Times bestseller list for examples.)

Then take that idea and break it down into three ideas. That might be:

OK, that may not be a perfect three-line summary of the first Harry Potter–it’s been a while since I read it. But you get the idea. You can think of it more or less as Act 1, Act 2, and Act 3.

Or: the beginning the middle, and the end.

Or:  Before, During, and After.

Then you take those three cards, and you write three cards about each of them, for a total of nine cards.

That’s as far as I got yesterday. But what comes next is–you guessed it–take those nine cards, and write three cards about each of them, for a total of 27 cards.

Now, I will warn you that at this point it gets a little weird. You might not have three ideas for each of your nine cards. You might find yourself getting a little too detailed in some cards, and staying pretty vague in others. The fact is that most three-act stories aren’t evenly divided into thirds. The first third and the last third are generally much shorter.

But don’t worry about that! These are only index cards! They’re ideas. I’ve filled hundreds of index cards with bad, unworkable ideas. If you have an idea, but you think it won’t work, write it down anyway! It’s just a little card.

Now it’s time for the final step, which is to take all 27 cards and to write three cards about each one. This will give you 81 cards. And you know what 81 cards is?

81 scenes is a book. Or a screenplay.

Generally speaking, of course! Your mileage may vary. But I promise you that if you can come up with 81 somewhat interconnected ideas for what might happen in your book, then you are on your way.

It’s not the only way to start. It’s not foolproof. Remember–a lot of those cards will have weird, wrong ideas on them! But now you have something tangible that you can mess around with.

Believe it or not, this idea is also super helpful later in the process, when your manuscript is a mess and you’re not sure how to fix it. Take that big pile of pages you’ve written, and translate it back into index cards–starting with just one line, then three, then nine…

You will find the holes in your story! You will have new ideas. You will start to move those cards around, and it will show you how you can move pages around.

At the very least, you’ll feel super-productive. It’s better than staring at a blank screen.