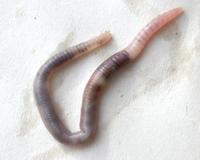 It’s not easy to identify worms by sight, but I think this one is Aporrectodea caliginosa, also called a field worm or a grey worm. It’s an endogeic worm, which means that it does not come to the surface of the soil but does not build a permanent burrow, either. It lives its life entwined in the roots of plants, helping to feed the plant through its constant plowing of the soil. It’s fascinating to watch this worm move because you can actually see the soil in its gut moving underneath its translucent skin.