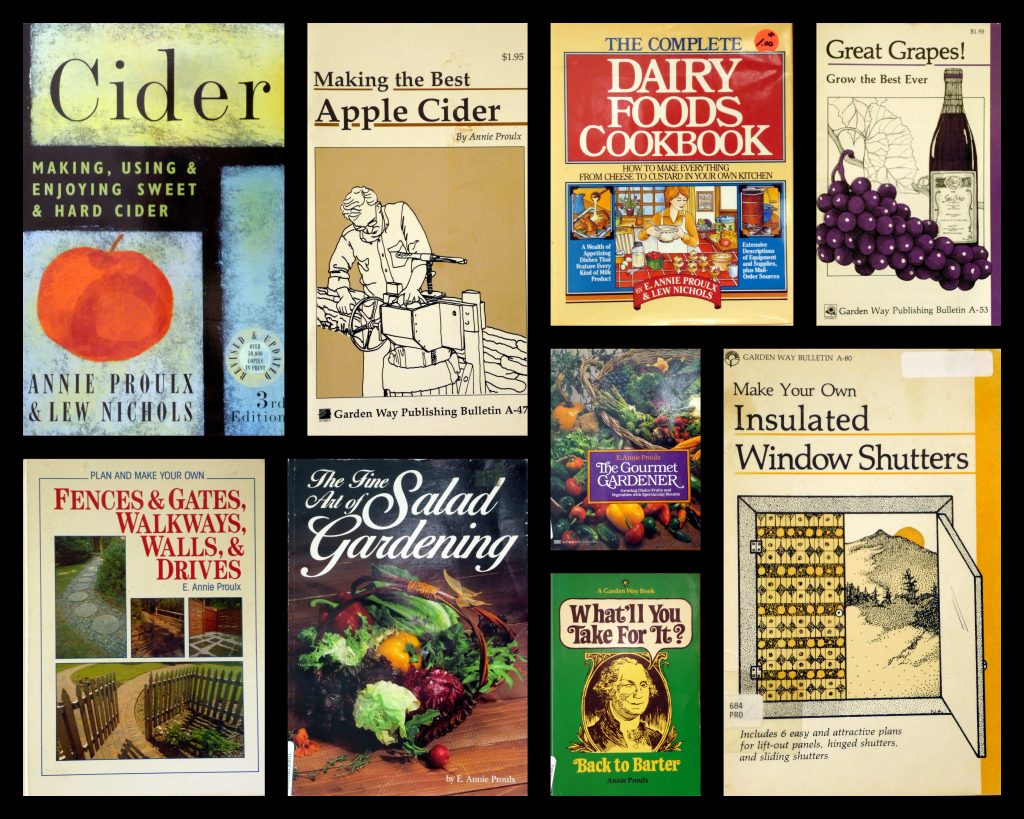 Before Annie Proulx became Annie Proulx, she was a garden writer. She wrote a book about salad gardening and another, called The Gourmet Gardener, about kitchen gardening. She wrote about growing grapes and building walkways and making your own food from dairy products. She wrote what is still the definitive guide to making hard cider. Storey and Rodale were her publishers; Storey has kept three of her titles in print,in part because they are still useful books, and in part, I suspect, because they get a kick out of sending royalty checks to Annie Proulx.

I don’t know much about her personal life–she’s one of those fairly reclusive authors who manages to stay offline and get work done. I can tell you that she lived in Vermont, worked a variety of jobs, got married and divorced a few times, and that, from the age of about 45 to 52, she wrote ten books and booklets on gardening and homesteading.

Then, the year after the publication of The Gourmet Gardener, her collection of short stories Heartsongs and Other Stories was published.  That was followed by a novel, Postcards, which won the PEN/Faulkner Award.  And in 1993–at the age of 58–came The Shipping News, and with it a Pulitzer and a National Book Award.

In an interview with The Atlantic, Proulx has this to say about her years as a garden writer:

“What interested me at this time was the back-to-the-land movement — communes, gardening, architecture, the difficulty of maintaining a long, dirt-road driveway. Not only could I solve some of those problems in real life … I could write about them and make some money…. But gradually this kind of thing became more and more boring, and my interests changed. I began to move towards fiction for intellectual stimulation.”

“What’s reflected in my fiction did not so much jump from manuals on grape growing and fence mending as from very serious academic hours in libraries and archives and an inborn curiosity about life.”

I’ve become fascinated with this remarkable transformation in her life that came about in her late 50s.  I already had a copy of her book on cider. With the publication of her new memoir, and all the press surrounding it, I got to wondering if she had published any other books back in her cider-making days. It took a little while to compile the list–there are 10 in all, I think, and I’m missing one in the above photo– but once I had the list, it was easy enough to pick up each of these for a few bucks online. They aren’t exactly collectors’ items. (The complete list is after the jump if you’re interested.)

I’ve shown these books to a few friends — all women, although I’m not sure that men wouldn’t have the same response – and every one of them has lit up.  “This gives me hope,” said one friend in her late fifties. “Look at what I can still do.”   “Oh, yes,” another said.  “I’m sort of banking on the fact that my most productive years are ahead of me.”

There is something hopeful and wonderful in the notion that you could go from writing books on fencebuilding to–well, being Annie Proulx. But there’s something weird about it, too.  It’s so strange to see her name on these old gardening books.  I have a recurring publication dream before every book comes out–I’ve already had it for Wicked Bugs–in which the first box of books arrives, fresh from the printer, and it turns out to be a completely different book than I thought it would be.  A different title, a strange cover, chapters inside that I don’t remember writing on subjects I don’t know or care anything about.  I imagine Annie Proulx having a dream that she wrote a novel called The Shipping News, but when it arrives from the publisher, she opens it and finds a box of pamphlets called Making Your Own Insulated Window Shutters.

You might be wondering if these straightforward guides to gardening and homesteading give any hint that the author would go on to win every major literary award and be regarded as one of America’s greatest novelists. I’ll let you decide.  Here are a few random bits of garden writing from Annie Proulx:

On cider: “If you make cider with apples that haven’t been washed, that have dirt, manure, grass, and other vegetative matter clinging to them, if your crusher and press are filthy with dust and old pomace, if your bottles and barrels are dirty and encrusted with ancient deposits, if a mouse or rat falls into your fermentation vat, if you add rotten apples or worse to the juice, if you forget to mill the fruit for six weeks after the harvest is in, if you simply do not care enough about the process to keep your equipment clean, you are destined to produce a disgusting and vile liquid that is the result of putrification, not fermentation. The problem is 100 percent avoidable.”

On bartering: “Try to list only skills you enjoy exercising; it’s not much fun swapping bookkeeping chores for the things you need if you loathe ledgers and moved to the country to escape from them. If you prefer knitting fancy, intricate patterns instead of plain socks and mufflers, say so. If making an outrageously luxurious Black Forest cake appeals to you more than canning tomatoes, stick with the cake.”

On salad greens:  “What lettuces there are!  Frilled edges, curly leaves, speckled and freckled, ruffled and folded, shaped like oak leaves and deers’ tongues, growing in tall cones or low rosettes, and in colors from lime green, deep viridian and bronze to ruby, creamy yellow, or variegated combinations such as a delicate green leaf with a dark red border; lettuces with textures that range from a crunchy, crisp snap to a tender, melting smoothness; flavors from the tasty, savory cos to the delicate, buttery Bibbs.”

And–just to prove that there is nothing new under the sun–she wrote this 24 years ago on the subject of kitchen gardening:  “A new kind of gardening has become part of our lives.  It is experimental, specialized, nostalgic, and beautiful when edible plants are part of the aesthetic landscape.  The new gardening parallels our awakened interest in fine food, regional delicacies, and native cooking–hot chiles handed down from generation to generation in the Southwest, New England deep dish apple pie made with Pinkham Pie apples or greenings. We have developed a taste for the choice and unusual products of the garden…”

Well.  There it is, folks.  If Annie Proulx, Garden Writer had been doing her thing in 2011 instead of 1981, she might have been right here, hanging out with us.  Imagine that.

Bibliography after the jump.

Annie Proulx’s garden bibliography, as near as I can tell:

Proulx, A., & Nichols, L. (1982). The complete dairy foods cookbook: How to make everything from cheese to custard in your own kitchen. Emmaus, Pa: Rodale Press.