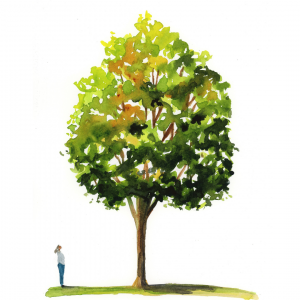 After over a year of not writing a book…I’m writing a book. I just made a deal with Random House to publish THE TREE COLLECTORS: Tales of Arboreal Obsession, which I am going to both write and illustrate.

About ten years ago, I met a man who introduced himself to me as a tree collector. He lived in Pennsylvania, where he had some acreage. He planted every kind of tree that struck his fancy, and crammed them in together as closely as he reasonably could. He told me that he had 150 different species and cultivars, growing in rows the way a book collector would line up books on a shelf.

I remember thinking at the time that trees were an odd thing to collect. They are large and difficult to move. Most collectors like to trade up, swapping out a better version when they can afford to. A collector’s taste might change over the years, and they might get rid of more common items to make room for the rare and unusual. But how do you do that when your collection consists of enormous living, breathing organisms?

I thought at the time that it might be an interesting idea for a book, and I even met a few more tree collectors over the years, but it just never came together in my head. Then, over this last year of being stuck indoors with not much to do, I picked it up again. When I thought about it as an illustrated book, it just made more sense. The idea of including some art seemed to breathe more life into the idea.

Anyway, I’ll be profiling about 50 tree collectors, and talking about other ways of thinking about the idea of “collecting” without actually owning a large parcel of land and filling it with trees, such as projects to catalog urban trees and so forth.

It feels good to be getting back into a project, after taking a longer break than I’ve ever taken in my life. I certainly wanted a break, after twenty years of writing books, doing book tours, researching books, and generally being on the treadmill of endless tasks that self-employed people find themselves on. For that entire time, I always worked seven-day workweeks. I never gave myself an official day off, apart from those days off that happened by accident, if I was sick or on an airplane all day (which doesn’t count as a day off, really) or actually traveling on an actual vacation, but even then I was always working, a little bit.

So now I’m back at work, but at a much more livable pace, with actual days off and no guilt trips about uncompleted tasks or unanswered emails. I’ll be at work on this book for a couple years, and I intend to make very few other commitments so I don’t go back to my old overscheduled self. Wish me luck.

Oh, and if you happen to know a tree collector, send them my way!

I’ve put off saying this out loud, because it felt weird, but…yes, it’s true…I won’t be writing another Kopp Sisters novel anytime soon. When I started down this road, I said that I could see myself writing 7-10 of these books. At the time that sounded crazy–how on earth was I going to write seven whole novels?

But here we are. I won’t give away the ending of Miss Kopp Investigates, but if you read that far, you’ll see that I’ve left them in a good place, a place that is based on their true story, and a place that I could easily pick up again down the road.

I was sad to step away from their little world, where I’ve spent so much time over the last decade, but it was time for my brain to have something different to do. Ten years is a long time to think about one thing. Thanks to all of you who have been cheering me on, and who loved the Kopps as much as I did. That’s all I ever wanted from these books, for people to love them.

Keep up with these and other updates by subscribing to my newsletter.