Your Sister Didn’t Take Art Away From You

Posted by Amy Stewart on December 22, 2018 in Creativity, Paintings, Writing 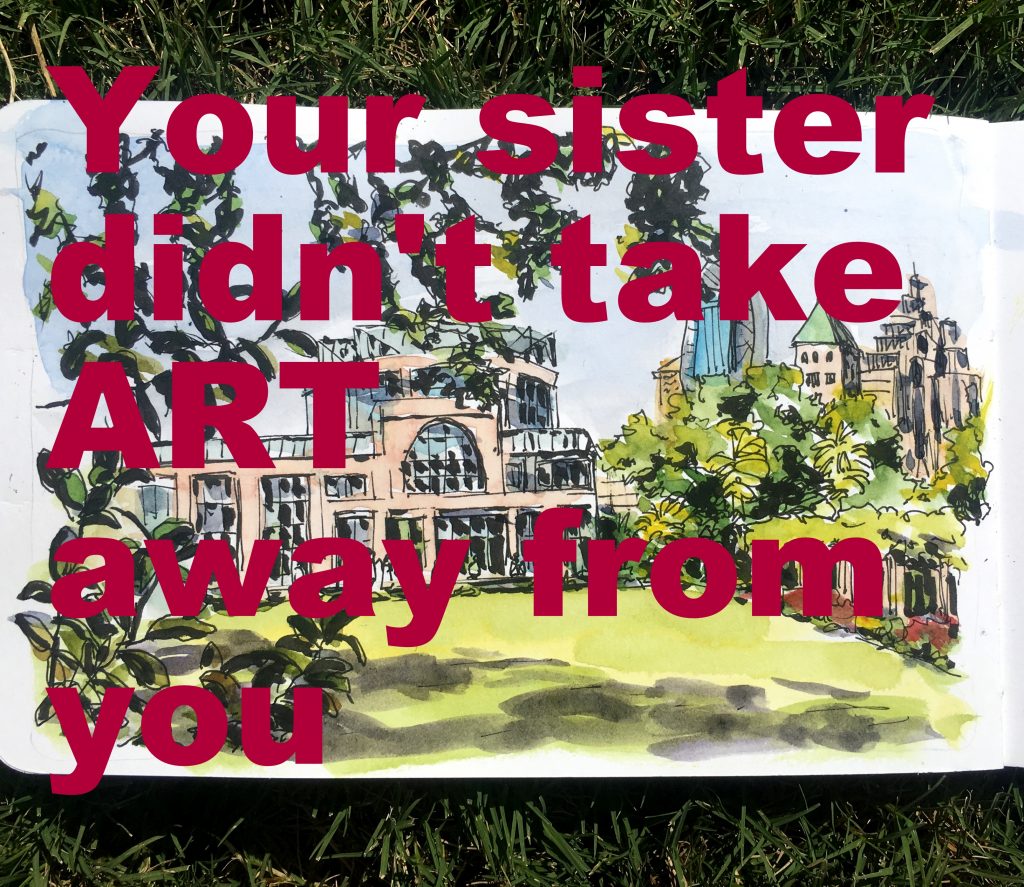 A couple months ago, I was sitting on a bench at the Atlanta Botanical Garden drawing pictures. A woman walked by and said, “Look at that! You’re so talented. I wish I could draw like that. I always wanted to.”

“You can,” I said. “All you have to do is take some drawing lessons. That’s what I did.”

I laughed, but I wanted to cry. “You sound just like me. I used to say that. My brother’s the artist. My father’s the musician. Not me.”

She was having none of it. “Oh, but you should see my sister! She’s so good. I just can’t do what she does. So I became a psychologist.”

OK, there’s probably an entire life history in that sentence, but I knew she wouldn’t stick around long enough to unpack all that. Instead I said, “I couldn’t do it, either. I wasn’t born knowing how to draw. Nobody is. And you know what, mostly I learned ink and watercolor in some online classes that don’t cost much, and I did it in the winter when I couldn’t get outside anyway.”

“Really?” she asked. Hesitant. Unsure. Not believing me. “Because there’s good science that shows that some people are naturally more predisposed…”

“It doesn’t matter,” I cut in. “Really. You can do this. You just have to take some classes.”

She was starting to back away. “I don’t know.”

I added, “Your sister didn’t take art away from you.”

Now she laughed, but she looked like she wanted to cry, too. “You mean I have to stop blaming my sister for this?”

A few minutes later, another woman walked by. Same deal. “Oh, that’s so beautiful. You are so talented. I wish I could do that.”

“You can,” I said, sounding like a broken record. “You just have to take lessons.”

“I didn’t have a talent for it either,” I said. “I didn’t used to be able to do this. Then I took come classes. Now I can. It’s something you learn.”

She laughed, nervous. “Oh, I don’t know about that…”

I couldn’t show her any proof, but here is some proof for you. Below is a picture I just found in an old notebook, drawn when I was 30 and thinking about taking an art class. No sane person would claim that I had an ounce of talent for drawing. If you drew this, it would serve as proof to you that you had no talent and should not pursue art.

Now, you’re not required to love the picture below that, and you might question why I haven’t made a little more progress in 19 years. Nonetheless, this is what I do now, after years of art classes. It’s the kind of drawing that leads people to use the word “talent” when they see what I do. 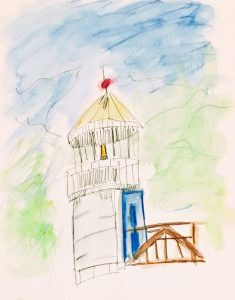 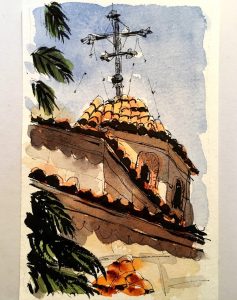 So here’s the deal. We have this idea that there’s a thing called Talent, and that some people are born with it, and others are not, like blue eyes or curly hair.

If you have Talent, you can play an instrument or sing a song or paint a painting or write a book.

If you don’t have Talent, you can’t do any of those things. Need proof? Try it once, with no training or instruction, and show the world how you failed at it.

There. You’d like to do it, but you don’t have Talent. Your one failed attempt is proof of that.

Your sister has Talent. There was only one Talent, and your parents had to decide which kid to give it to, so they gave it to your sister.

Or maybe nobody in your family has Talent. There. See? We don’t have it in our family. And if we did have it, we’d have to argue over which one of us gets to keep it, so it’s just as well we don’t have a single one.

So I’m here today to call bullshit on the very idea of Talent as an inborn trait, something that you either have or don’t have as a result of your birth.

This is one of a series of posts I wrote about this notion that the pursuit of art (or any passion, really) is something you’re either born to do or not. Read all of them:

Your Sister Didn’t Take Art Away From You.

I’m Calling Bullshit on the Whole Idea of Talent

It Doesn’t Matter How Good You Get