I’ve always shied away from getting people into my drawings and paintings. For years almost everything I did looked like this: 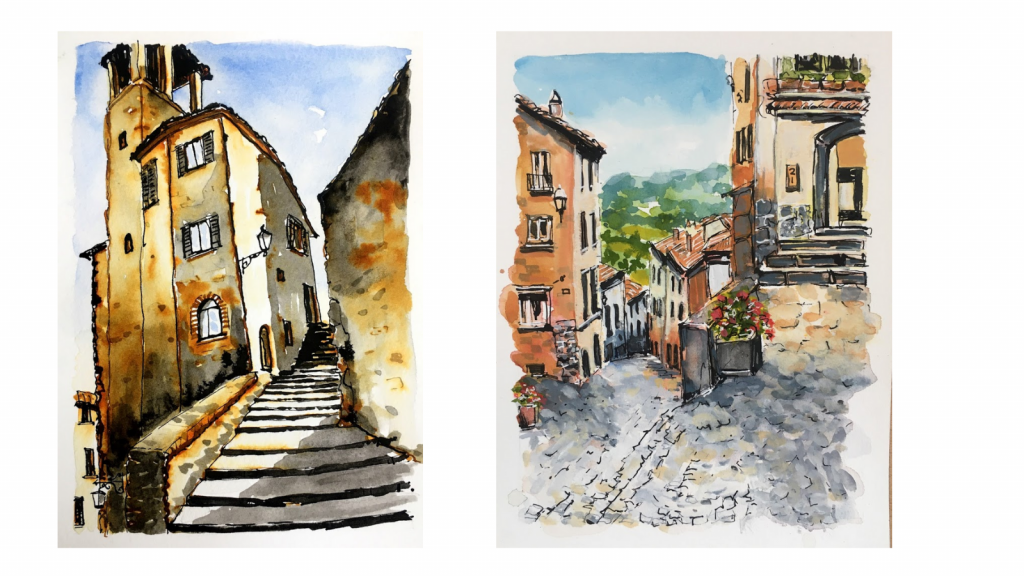 No people. Entirely depopulated streets and towns, as if all the citizens had been raptured or abducted by aliens.

Sometimes I’d drop just one little figure in, for scale. 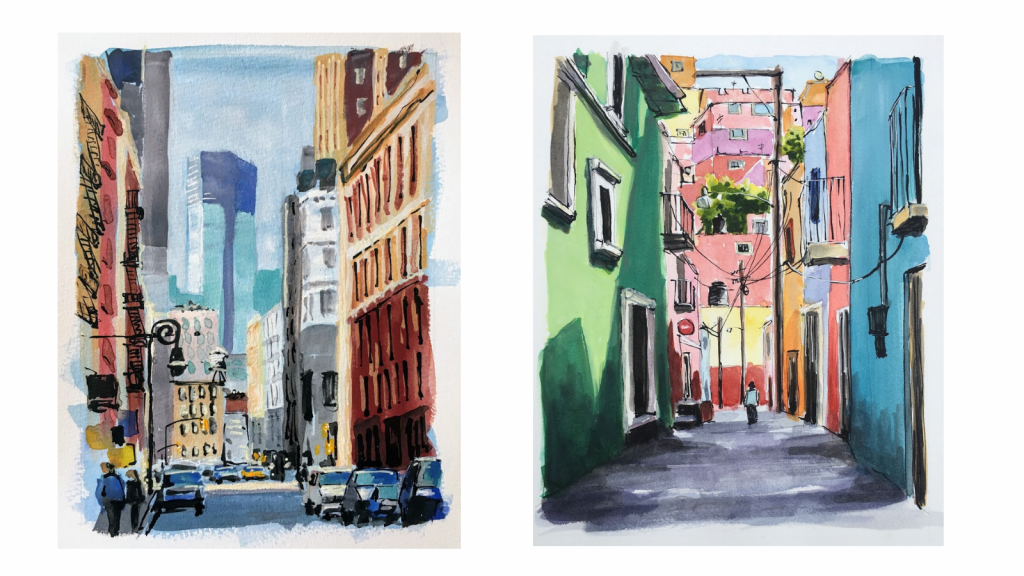 But really, they were still drawings of buildings, with a couple little lumpy shapes to show that people do exist in cities.

But of course, if you’re into urban sketching, you can’t ignore the people forever. Over time (and with the help of some terrific teachers, such as James Richards) I started to be more deliberate about populating my sketches with people. 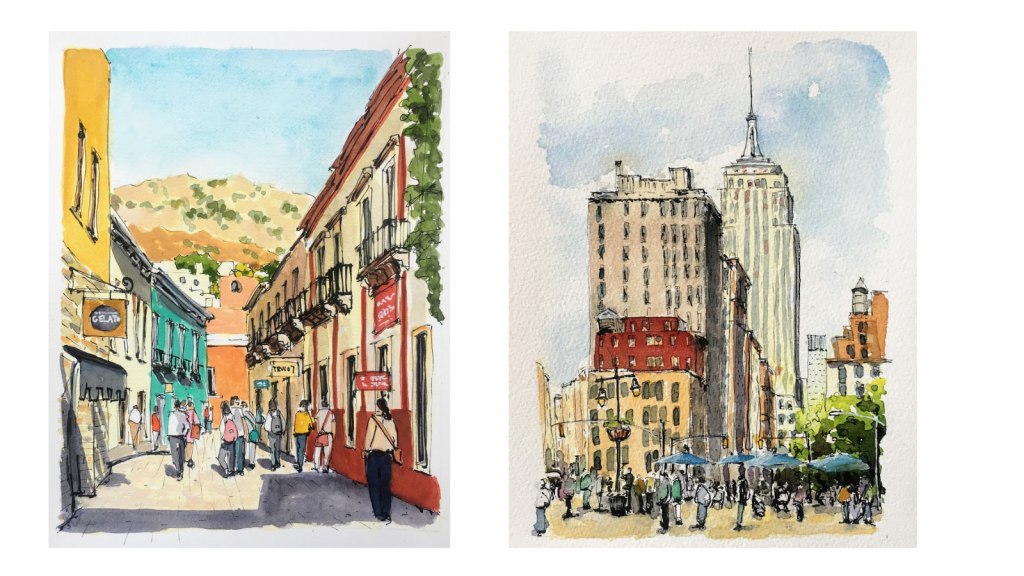 Still, these figures are accessories, like the street trees and lampposts and picnic umbrellas, meant to convey the sense of a lively street. They’re not about any one person doing any one thing–they’re about people collectively, like a flock of birds. And that’s great–I love these pictures. (I love all the pictures I’ve posted here–none of this is a criticism of my own art at all, just an observation about what I tend to focus on and what I don’t focus on.)

But lately I’ve been admiring the work of artists like Jenny Kroik, whose illustrations tell such a story about the city she lives in. I also admire her gouache technique, so I started making little studies of her paintings (“study” is an artsy word for “copy”) in my sketchbook, to figure out how she does it.

I was mostly working on technique but what occurred to me is that if you really want to tell a story in your sketchbook, you need to have people acting out that story.

This is hilarious, that I would only think about this now. I’ve been a full-time, professional writer for 20 years. I’ve written books about earthworms, cut flowers, poisonous plants, and I’ve written a bunch of novels. What I always tell people is, “That wasn’t really a book about earthworms. It was a book about people who study earthworms. Stories have people in them. If I’d left out the people and only written about worms, I wouldn’t have had a story. There’s no book in that.”

And at that moment, Portland was having an interesting event: an epic snowstorm. I could see from my window that Portlanders were out in the snow, doing whatever Portlanders do. So I grabbed my camera (not my sketchbook, c’mon, it’s cold outside) and decided to go looking for stories. Here’s what I found:

Portlanders and their beverages, hours before the next wallop was predicted to hit and possibly knock out power: One last coffee run, and a trudge to the liquor store. 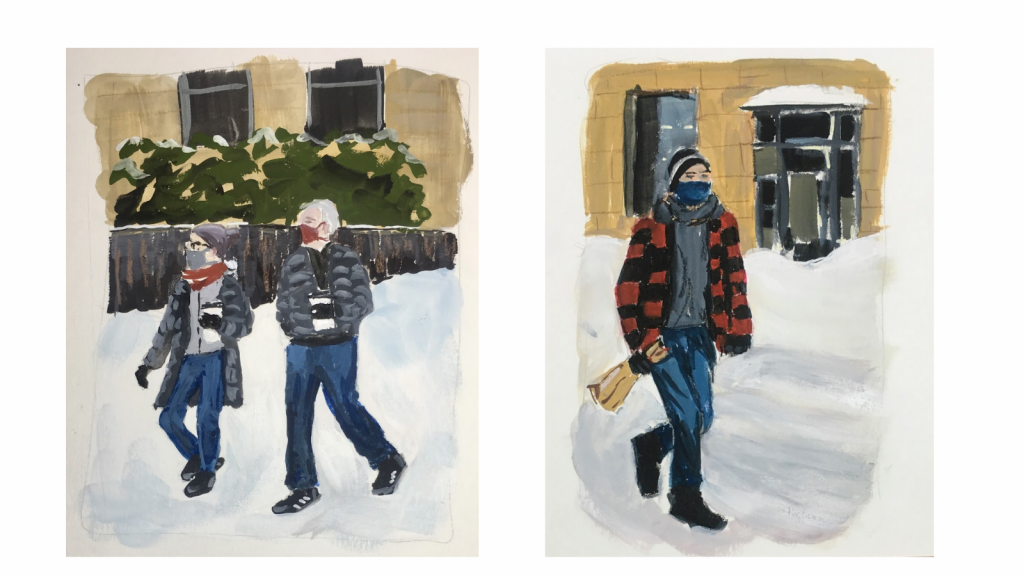 Kids carrying around enormous chunks of ice, for probably the first time in their lives, and somebody making the all-important Trader Joe’s run. 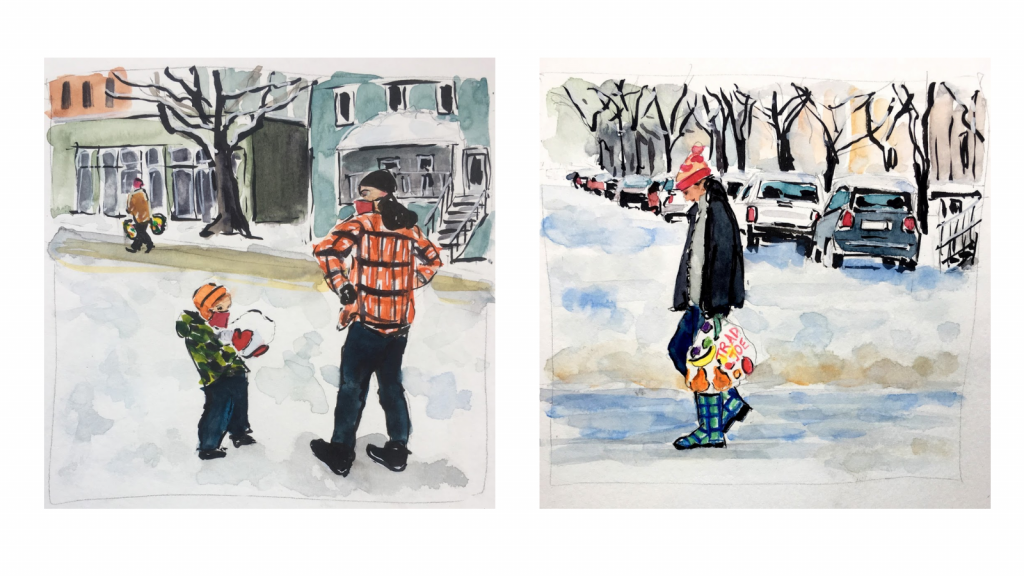 An unplowed side street getting turned into an impromptu dog park. A walk (with trekking poles, just in case) while FaceTiming with incredulous relatives who have never seen Portland like this. 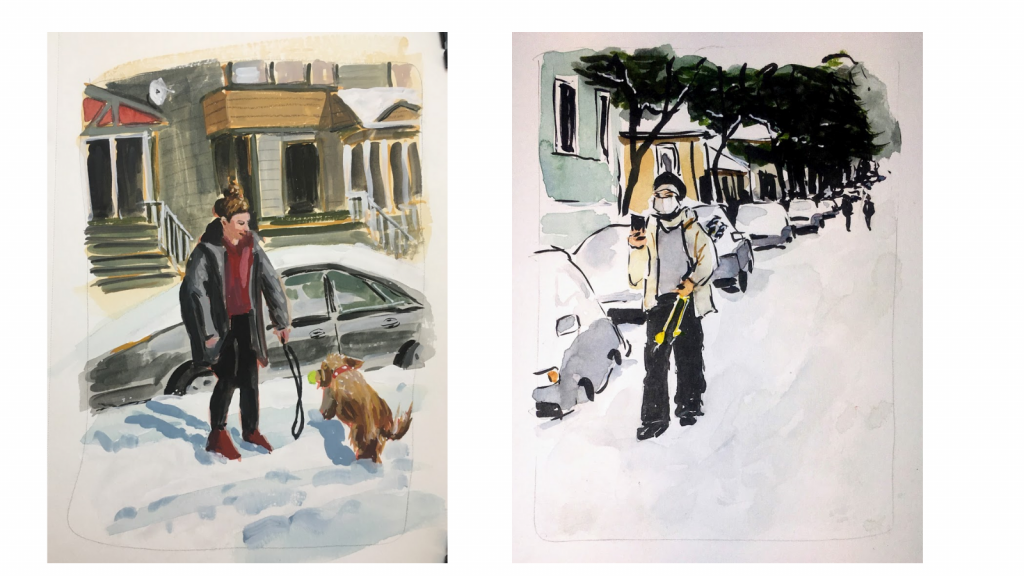 It’s intimidating to put people front and center. I did a lot more in the way of preliminary sketches for these than I would normally do. Something I learned from Marc Taro Holmes: It’s perfectly fine to do seven or eight pencil sketches of a person and just pick one to ink and finish. Studio artists do this all the time: they’ll work up a lot of sketches before committing to a big painting. But I tend to forget that even within a sketchbook, a sketch can have sketches. (This in spite of every teacher who has ever taught me to make thumbnails, including Shari Blaukopf.)

Anyway, this is what I got out of Portland’s snowstorm and a lot of idle time to think about art: Where there are people, there are stories. Those stories might be small–a woman trudging through ice to get to Trader Joe’s–but isn’t that what cities and towns and villages are made up of?  A million small stories that somehow come together to tell us something about the place?

Plus pretty buildings and trees and streets and lampposts, of course.