So I’ve persuaded you to let go of this idea of talent, and child prodigies, and to put down the neuroscience and back away slowly.

Maybe I’ve convinced you that you—yes, you—could, even with your meager, talentless, non-optimized brain, learn to play the piano or draw a picture.

But! You might argue now. I can’t spend twenty years on this! I didn’t go to art school, and now I can’t. It’s too late. I’m too old. I can’t afford it. I don’t have time.

I took art classes once a week, on Wednesday nights, except when I was out of town, which was often. The classes cost $25. Some weeks I practiced outside of class, and some weeks I didn’t. Then I took some online classes that cost about $30 for several hours of instruction. I took those classes at home, in spare minutes, instead of looking at Facebook.

You probably have twenty-five bucks and a couple hours a week.

Now, I did that for fifteen years. Ah-ha! you might say. There it is. I don’t have fifteen years. I’m sixty already. If I started now, I’d be seventy-five by the time I got to that point.

But guess what? You’re going to be seventy-five anyway. (At least, I hope you will.) The only question is whether you’ll be a skilled artist at the age of seventy-five or not. Which would you prefer?

I thought so. Go ahead and start.

A very nice woman in her early seventies sat down next to me on a bench in Oxford, MS a few months ago while I was doing this not terribly sophisticated drawing. She said what people always say: “Oh, you’re so talented, I wish I could do that, I’ve always wanted to, can I just watch you draw, can I take a picture….”

And I said yes, and she sat where while I drew and we talked. She’d had a tough couple of years, with some health problems and having to move to a small town to take care of her ninety-something year-old mother. Her husband hadn’t yet retired. Everything was kind of rough.

“But someday!” she said. “Maybe in a few years I’ll try something like that.”

This woman is in her seventies, y’all! And I’m not saying that life ends at 70, but…if you’re still postponing things in your seventies? Get going!

And if you’re postponing things in your forties or fifties or sixties, let me warn you…this will be you, in your seventies! Still putting it off! Because that’s what you got used to doing.

“Oh no,” I said. “Not someday. Now. I keep all these art supplies in a bag by the front door. I can walk out the door and be back in half an hour. These are not great works of art that take hours and hours to finish. But I can fill a book with them.” 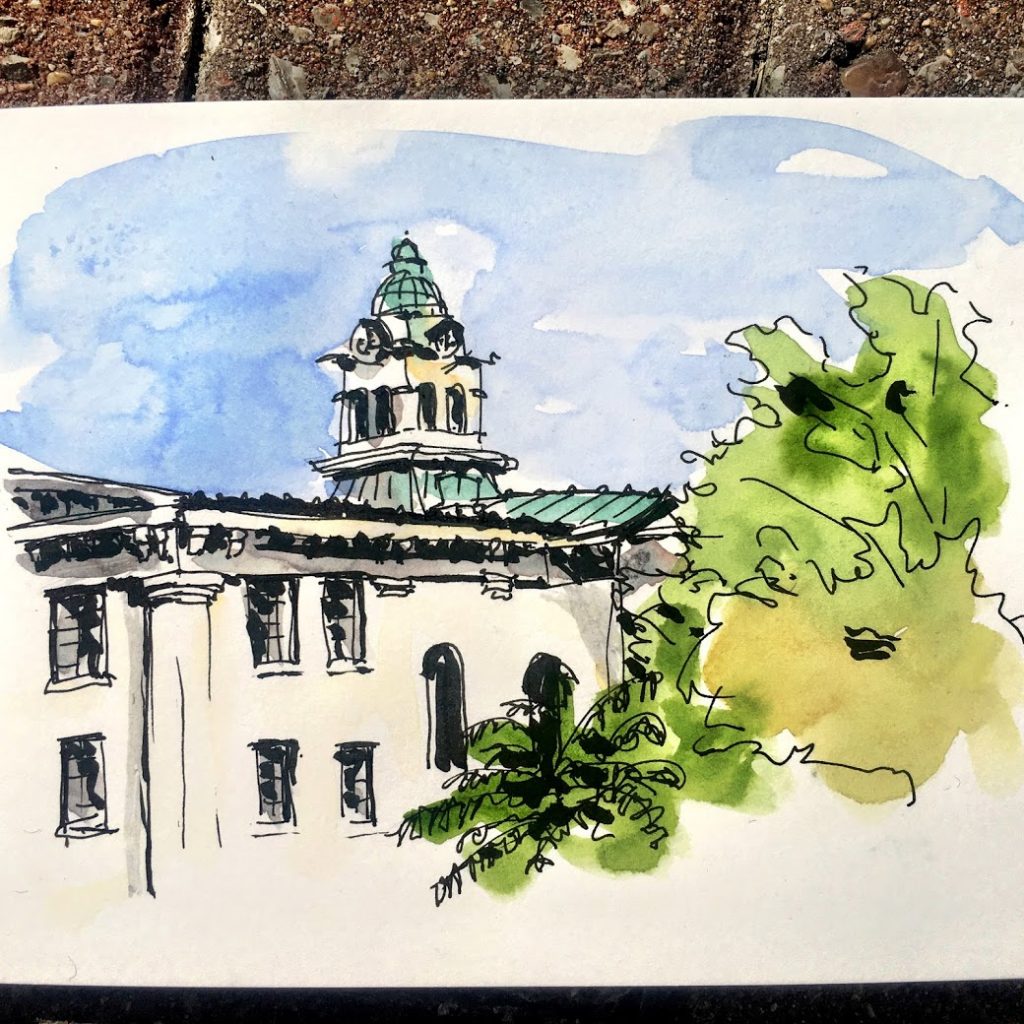 OK, sure, you might be thinking. Maybe I can take a lesson. Maybe I can keep some art supplies sitting out and pick them up for thirty minutes here and there. Maybe anyone can be taught the technical skills. But there’s more to it than that. It’s not enough to know how to draw. You have to know WHAT to draw. Where to place it on the page. How to set the mood. That can’t be taught.

People have said that to me, and pointed to my drawings as evidence. You chose to draw that clock tower against the sky, they say. I would’ve walked by and never noticed it. That’s your talent.

I have even more bad news: All of that is teachable, too. How to choose a subject is a topic in any drawing course, and, for that matter, in any writing course. How to find a focal point is a topic, in both drawing and writing. Composition—where to place the elements of your drawing so they are arranged pleasingly on the page—that’s a teachable topic (as is story structure, the literary version of composition). How to convey mood through the use of perspective, close-ups, values (light and dark), and color—that’s a teachable topic.

But I’ll never be any good, you’re now protesting, weakly.

I think we finally got to the heart of it, didn’t we?

But—wait. You know what? It doesn’t matter how good you get.

All that matters is whether you enjoy it.

Because when people stop to watch me draw, and say, “I wish I could do that,” the word that matters is DO. They don’t really want to have produced that particular drawing. What they really want is the pleasure of sitting under a tree with a watercolor set, creating some passable facsimile of the scene in front of them. It’s the activity that looks so pleasurable to people.

And anyone can learn to make a passable drawing of a landscape, and enjoy doing it.

Anyone can learn to play three chords on the guitar, which will allow you to play a recognizable version of almost every popular song written since 1950.

The question isn’t how good you’ll get. I’m willing to bet that your wish to paint, or draw, or write poetry, isn’t born out of a desire to make art that other people will universally regard as brilliant. You’re probably not longing to play the piano because you want to hear other people praising you.

Now that she’s out of the way, go sign up for a class. Make something, and enjoy doing it.

This is one of a series of posts I wrote about this notion that the pursuit of art (or any passion, really) is something you’re either born to do or not. Read all of them:

Your Sister Didn’t Take Art Away From You.

I’m Calling Bullshit on the Whole Idea of Talent

It Doesn’t Matter How Good You Get