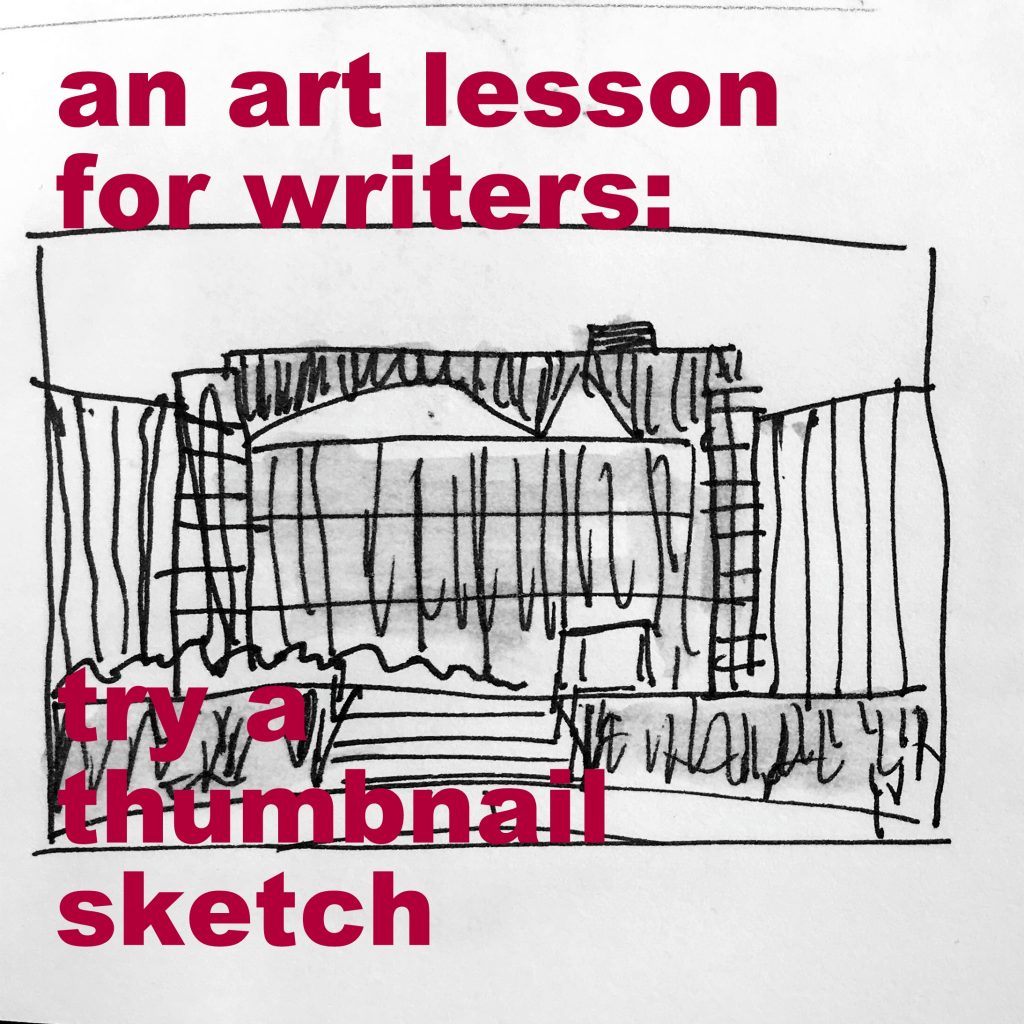 Most artists begin with some version of a thumbnail sketch. It might look like this one: a tiny, rough drawing, made with the purpose of working out where the big shapes go. Generally there’s some attempt at indicating value (light and dark) as well. You might do four of these before you settle on a composition that works.

When I do an oil painting, I’m generally working from a photograph, so I’ve already messed around with the composition on my computer and cropped it to suit. But I still do something like a thumbnail: I make a rough drawing on the canvas, using just one color of paint, to work out the values and the big shapes.

Same with sketching. I don’t generally make a thumbnail before I start to sketch–after all, the sketches themselves are already small and informal–but I do draw in the major shapes first, very lightly, in pencil. I almost always erase and adjust. Then, when I start to draw in pen, I change the drawing again, because now I’ve been looking more closely, and I can make better observations than I could even a few minutes earlier.

These are very ordinary, everyday techniques for artists. I’ve realized, over time, that the thumbnail sketch doesn’t just help solve problems. It isn’t solely a means of deciding how high or low the horizon should be, or whether the focal point should be to the right or left of center.

It’s also a way of ruminating over a subject before committing to it. It’s a way of making a first pass through your idea, and getting better acquainted with it. It’s a way of connecting your subject to your eye, and your eye to your hand. If you make any kind of art, you know that connection has to be rebuilt every time you pick up your instrument.

So how do writers make a thumbnail sketch?

Lots of writers make outlines. There are as many different types of outlines as there are writers constructing them. Index cards, diagrams, mind maps, character sketches, Scrivener corkboards–people love that stuff. Also, some people hate that stuff. I know plenty of writers who can’t stand the idea of an outline. They have to wade right in.

There are also writers who keep journals (and even bullet journals). They keep track of character development, themes that are emerging, problems to be worked out. They might write as much in their journal as they do in their actual manuscript.

I do something in between. I think of it as a thumbnail sketch for writers.

I started keeping a writing journal a couple years ago, right after the 2016 election, when, like many artists, I was too distraught to work. I just picked up a blank notebook and started writing about how miserable I was and how nothing mattered anymore and how I couldn’t imagine starting another novel.

Then I wrote about how I couldn’t figure out what to write about.

Then I wrote a few paragraphs about that thing I couldn’t figure out how to write, and next thing you know, I’d made a little thumbnail sketch–in words–about the first page of my novel.

Then I wrote the first page of my novel.

That’s more or less how I proceed all the time now. I sit down and write ABOUT what happens next in the book. I write about all the things I haven’t figured out. “This is the scene where she catches the thief,” I write, “but I still don’t know how she catches him. The trouble is that he broke in at midnight, and she doesn’t arrive until the next morning…” and on I go, until I’ve worked out some plausible way for the next scene to proceed.

The problem isn’t always “what happens next?” Sometimes the problem is the tone. “This is supposed to be a funny scene, but I don’t feel funny today. Nothing’s funny.” Then I find myself writing about what MIGHT be funny, if only I could bring myself to consider it, and pretty soon I’m writing my funny scene.

Like a thumbnail sketch, this type of writing lets me work out the big ideas and put them into place. I can’t just think about a thing inside my head and then execute it flawlessly. I need to noodle around with it first, using the same tools I’ll use to make the finished thing, whether that’s a pen, a paintbrush, or a piano keyboard.

That’s how I connect my subject to my brain, and my brain to my hand. Once I do that, I’m off and running.