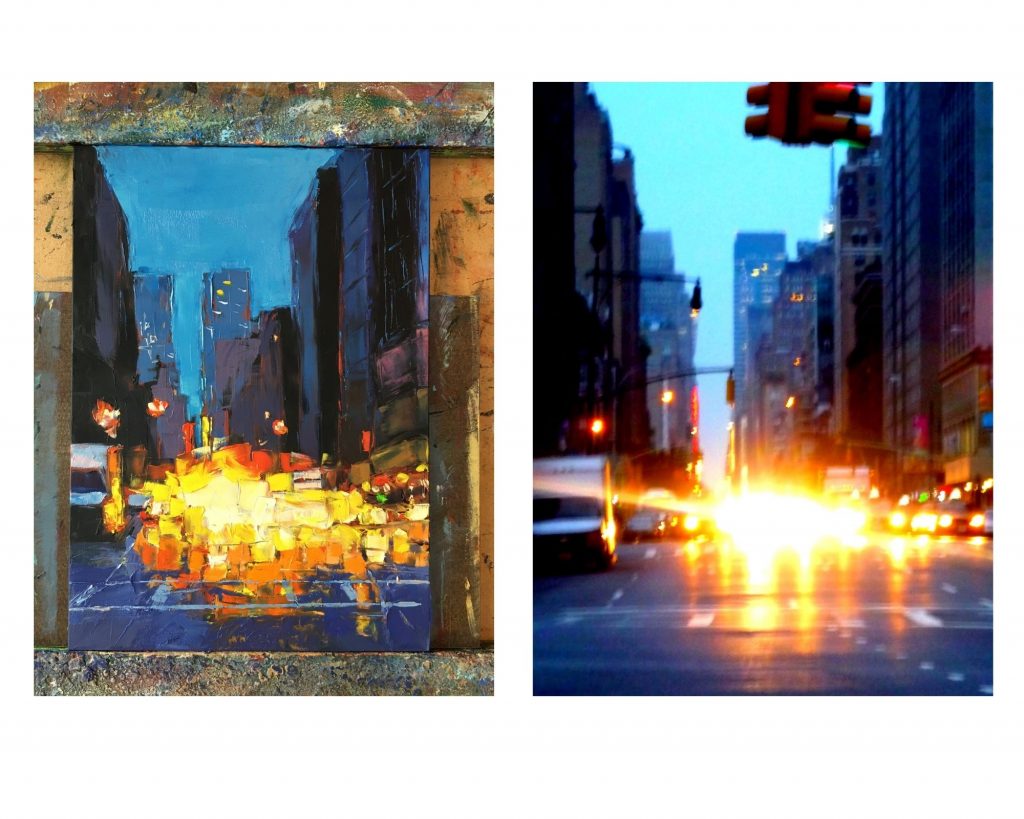 Several years ago, I took a class with Qiang Huang, an amazing oil painter from Austin. We were all painting from still lifes set up next to our easels. His work is both beautifully precise and also loose and imaginative. That balance of accuracy and abstraction was what we were all after.

At one point he said, “Your still life setup is just a reference for the design you want to create. You’re not here to copy it.”

In other words, a still life setup or a reference photo or the landscape in front of you should just be a jumping-off point for the painting that you’re going to make. If you find yourself struggling to make an exact copy, you’ve lost the thread of the thing.

I’ve been thinking about this a lot lately. I think there comes a point in a painting or a drawing where you almost have to set the reference aside. At some point, you just have to deal with the painting that’s in front of you. What it needs next may not be found in the reference you’ve been using. It becomes a matter of stepping back, squinting, maybe taking a black-and-white photograph to check the values, and making a decision about what the painting itself needs, not whether it matches the thing you’re trying to paint or not.

This is true of writing as well. You might start off with a very fixed idea of what sort of book you’re writing and what you want it to be like when it’s finished. But at some point, the book becomes its own thing. At some point, you have to deal with the book that’s in front of you, not the one you had in your head when you started out.

Ann Patchett said something like this when she wrote about book ideas being like beautiful butterflies drifting around in the air. “I reach into the air and pluck the butterfly up. I take it from the region of my head and I press it down on my desk, and there, with my own hand, I kill it. It’s not that I want to kill it, but it’s the only way I can get something that is so three-dimensional onto the flat page. Just to make sure the job is done, I stick it into place with a pin. Imagine running over a butterfly with an SUV. Everything that was beautiful about this living thing—all the color, the light and movement—is gone. What I’m left with is the dry husk of my friend, the broken body chipped, dismantled, and poorly reassembled. Dead. That’s the book.”

She’s talking about learning to live with the disappointment that inevitably comes when you compare the book you’ve written to the way it looked in your imagination before you started. And that disappointment is real.

In the case of a painting, though, I’d say that I never have a fixed idea, when I start, of how the painting’s going to look. I have my reference (a photo, maybe), and I know I’m going to make something out of it that somehow speaks to whatever drew me to the image in the first place. But I’m just as surprised as anyone else to see what it looks like when I’m done.

Here’s the painting that’s on my easel right now, along with the image I started with. It’s a tricky photo to copy as a painting, because of the way the headlights are blown out and the halos around them. I’ve made a lot of changes and I’m still tinkering. But there’s no point, at this stage, in looking at the photo anymore. The painting’s become its own thing.