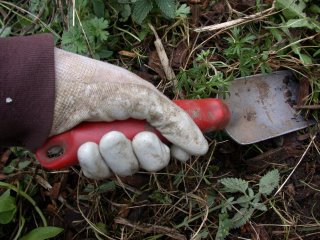 (A note from the author: You won’t hear from me again for a few days. I have some decidedly un-gardening things to attend to. This little rant will have to suffice until then.)

If you’re not a gardener, you might think that gardening is mostly about the plants: what to plant, where to plant it, what to feed it, when to prune it. While it’s true that gardeners are deeply involved with the lives of their plants, let’s not overlook another critical—and often exasperating—aspect of a gardener’s life: the gear.

I won’t even get started on tools with wooden handles that break after a week, rakes whose tines get tangled in whatever you’re raking and fall off, and pruning shears with badly-designed grips that slip out of your hands. No, winter is on the way, and all I care about this time of year are boots and gloves.

If I were a gardening glove, I would not ever want to end up in my garden. I would cower and tremble on the sales rack, hoping against hope that I was the wrong color or the wrong size or too expensive or too cheap to be chosen. And if I did have the misfortune to actually be purchased and brought home, I would hide. Hide in the closet, behind the fertilizer and the pruning shears. Hide among the weeds and hope to get left outside. I’d take any desperate act my little gardening glove brain could conceive of.

Because I am horrible to gardening gloves. Cruel and merciless. The average gardening glove has a life span of about three months in my garden. I don’t know how to account for this—if I’m lucky, I might get to spend one day a week engaged in serious outdoor work involving gloves, and it’s not as if I’m out clearing acres of brush. I have an ordinary, not-very-challenging backyard with all the regular sorts of flowers and vegetables growing in it. Somehow, though, the gloves fall helplessly apart when faced with the task of coming between me and my garden. It starts with a split at the fingertips on the right hand, then the left hand, until dirt leaks in and the gloves offer less and less protection against water, mud, and thorns.

I finally gave up on the idea that gloves should last a season and decided that I would spend no more than five dollars on each pair. That way, if they fell apart in a few months, I could toss them out with very little guilt. My first under-five-dollars purchase was a pair of $3.99 Atlas Nitrile Touch gloves. They’re trim, close-fitting gloves that leave me with enough dexterity to handle seeds and other small, delicate things. (I can even type in them. I just tried it. Amazing.) They’re made of stretchy, breathable nylon and the fingers and palm are coated in a thin layer of rubbery stuff—I guess that’s the nitrile—to ward off water and mud. Best of all, they come in my size, extra small, which is very hard to find.

And guess what? They are impossible to kill. They’ve lasted all year and show no signs of falling apart. Now that winter’s almost here, I might even spring for the fleece-lined version to keep me warm when I get around to the seriously muddy work of bareroot planting. Atlas also makes a completely waterproof pond glove and any number of heavy-duty tool gloves, all of which sell for just a few bucks apiece, and many of which are available online in boxes of a dozen. Even a box of twelve costs less than I used to spend on a single pair of those fancy, doomed, soon-to-be-fingerless gloves.

While so many of the gardening gloves I’ve tried have been short-lived, I’ve had astonishingly good luck with gardening shoes. The rubber Birkenstock garden clogs I bought six years ago are still going strong; while they’re ideal for dashing outside to dump something on the compost pile or cut some herbs, don’t try spending a day in them. The clogs become so full of dirt and twigs that you might as well be padding around in your socks.

For long days of hardcore gardening, nothing’s better than a pair of Sloggers boots or Muck Arctic Boot

‘>Muck Boots, both of which are available in nurseries and feed stores around town. Both come in a half-calf length; Muck Boots are also available in a taller size. They’re incredibly warm and waterproof, they hug your legs to keep grime and water out, and they’re comfortable enough to wear for a walk in the woods or on the beach in winter. They’re expensive—fifty to eighty bucks would buy you a lot of daffodil bulbs—but mine are well on their way to lasting a decade.

A friend in Oregon once told me that the trick to gardening in the Pacific Northwest is to ignore the rain. Don’t wait for it to stop, or you’ll never get anything done. Just throw on your rain gear and get outside. As I write this, the rain is pounding so hard on my roof that I can hardly hear myself think. My boots and gloves may be up to the task, but I’m not. The garden will be just fine without me until the rain stops. Until Atlas or Sloggers comes up with a full body suit, I’m staying inside.