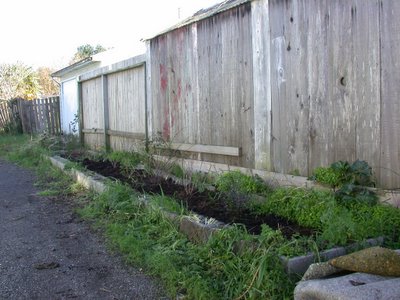 Here’s another unattractive bit of garden–the alley behind the house. You’re looking at the back wall of the chicken coop and a little stretch of fence. It’s usually overrun with blackberry brambles, and it’s on the north side of the fence, so sun’s a problem, but I figured I might as well try to make use of it. There are all kinds of large shrubs I’d love to have in my garden for one reason or another, but I don’t have the space for them and/or they’re not interesting enough all year to earn their keep.

Mostly I’m talking about shrubs that produce berries or interesting branches in winter or flowers in early spring–witch hazel, forsythia, red and yellow-twig dogwood, etc. There’s very little going on in the garden this time of year (as yesterday’s post proved), and it would be nice to at least have an interesting twig to bring indoors and put in a vase.

So in that spirit, I hired some guys to clear out the brush, then I lined it with cardboard and newspaper to hold the weeds down, used cinderblocks as a sort of visual barrier to keep cars from backing right over the young plants, and now there are some young shrubs–just bare sticks, really–getting their start. I’m not sure how things will fare back there, especially in summer, when I’ll have to drag the hose out to water, but who knows–maybe this time next year, I’ll have something to show for it.