The garden in February 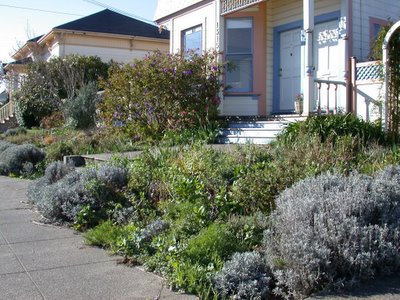 OK, I’m up for the challenge…I’ll post the same photo every month and we’ll just see what comes up.

The lavender hedge is not long for the world. Planted in winter 2000-2001, so now it’s old and scraggly. I’ll replace with ornamental grasses and something or other as soon as I figure that out.

Plants purchased at Seattle Garden Show (damn them for selling bareroots in plastic bags! I came home with a suitcase stuffed with plants and samples of compost–in other words, a garden with wheels and a handle. Scott could not believe how heavy it was.) Anyway, plants:

Two gas plants (Dictamnus alba, purple and white)–and has anyone ever actually lit one of these? Seriously, I need to know.

A little red burnet, not sure which one (Sanguisorba)

A little chartreuse anenome, who knows what that’s called, but how cool is a chartreuse anenome (yeah, I know, Susan, I should save my plant tags and put them in a book, really I love this idea, but it’s not in my nature, I guess.)

Just arrived from Digging Dog–and I only know the names because the packing slip is right here: