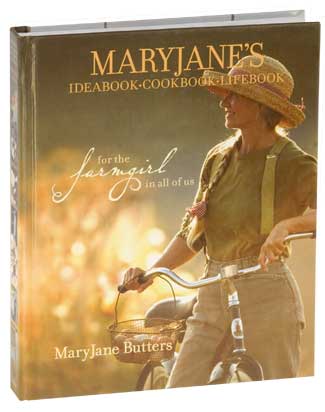 MaryJane Butters is a force of nature. She bought a farm in Moscow, Idaho in 1986, hoping to live the rural life of her dreams. It was tough going, but she found some unconventional ways to finance the farm: she started a “Pay Dirt Farm School,” in which would-be farmers can pay three grand to spend a week tending beehives, planting crops, and chopping firewood (you heard me—people pay her to chop wood); she began selling packaged, quick-prep organic meals, and she sold shares in her enterprise to a group of stockholders.

Oh, and she runs a bed-and-breakfast, grows her own biodiesel fuel out of mustard greens, and sells her eggs and produce through a community-supported agriculture program. And she publishes a glossy magazine called MaryJane’s Farm, which is a gloriously disheveled mixture of recipes, gardening tips, advice for decorating the henhouse, and ads for her organic food.

Sound familiar? Clarkson Potter, a division of Random House, thought so, too. They ponied up $1.35 million for a two-book deal, and many in the industry speculated that Butters would be the next Martha Stewart—the organic, dirt-under-the-fingernails, version of Martha, the one who you believe might actually do all that cooking and farming herself. And unlike Martha, there’s no need to worry that an ill-advised call to a stockbroker would land her in trouble. MaryJane was recently quoted as saying that, much to her accountant’s chagrin, she hasn’t even opened a savings account. And she’s turned down TV offers so she can stay on the farm.

Her first book, MaryJane’s Ideabook, Cookbook, Lifebook, was published this summer. I was reading it in the garden last week when my chicken Eleanor jumped in my lap and stuck her beak right into the book as if she wanted to read along with me. That’s when I realized that I was having a farmgirl moment, and that between the egg-gathering, the worm-farming, and the berry-picking, I’ve been having farmgirl moments for a while now. Have I become a MaryJane devotee, or did she just happen to come along at the right time?

MaryJane’s world is not perfect, polished, or unattainable. (On the website she offers Farmgirl Chapter kits for people who want to organize local groups of farmgirls; those requesting the kit are warned, “The cover letter in our Farmgirl Chapter Kit says there are 10 posters included. We didn’t get around to making those posters, so please don’t think we left them out.”) So she doesn’t get around to everything. What do you expect? It’s a farm. She’s busy.

The new book, like her magazines, are an odd blend of clippings, stories, and craft ideas. Enter MaryJane’s world and you’ll meet a woman who embroiders pillows with the alphabet, in the style of an old-fashioned sampler, then underneath she stitches these lines: “My mama said for me to do this—it would be fun—it was not.” You can find out how to “sass up” flip-flops by adding old plastic clip-on earrings. There are ideas for making purses out of old calendars and contact paper, and lots of recipes involving Jell-O molds. MaryJane’s in favor of eating salad for breakfast (just add hard-boiled eggs and chunks of apple) and she likes to wear aprons because “they separate your outside self from your inside self.”

What I love about this book, and the magazine, is that woven through them I hear the voices of women like my great-grandmother, who was all in favor of darning socks and building your own “outpost” in the backyard where you can camp in the summer. She, too, would have called the campfire meal you’d eat out there—roasted potatoes and johnny cakes—a “hobo dinner.”

And when MaryJane wrote that women love chickens because “putting chickens to bed every night satiates our clucking, nurturing nature,” I was sure I was hearing one of my own aunts, who would have guessed (correctly) that I make a point of putting the girls to bed each night. They settle onto their roost, tuck their beaks under their wings, and let me scratch their necks and whisper to them for a few minutes before they fall asleep. Those are the kind of farmgirl moments I live for.