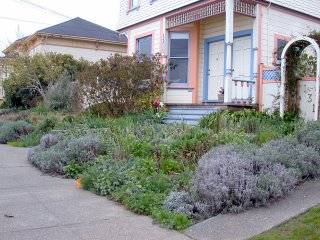 I’d promised to post the same picture of the garden each month, whether it looked good or not. For April I decided to conduct a full tour of the garden. So in the spirit of showing more real gardens, even when they look like crap…

The front’s coming along. Cerinthe is blooming. Rose campion about to start blooming. After that will be daisies, scabiosa, penstemon, coreopsis, and some salvia. But for now, I’m just glad everything’s green and alive! 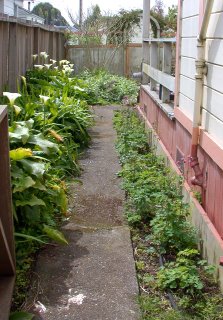 Now, inside the front gate, here’s the side of the house–callas to the left, columbine to the right. Big angel’s trumpet in the distance–it barely survives the winter each year but usually blooms in August. On the right, you can’t see an ancient fuchsia and rhododendron that where here when I bought the house. Each year, I threaten them with execution if they don’t perform, and so far they’ve managed to rally just before I come at them with the pruning shears. 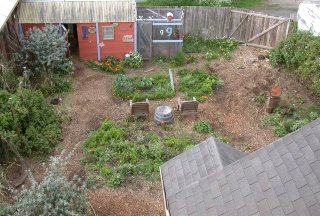 Turn around and walk through the back gate–here’s an aerial view from my attic. This has become the chicken yard. Berries on the left and right, coop in the back, and the middle is planted with low-growing, blooming plants that can handle chicken traffic–geranium, lady’s mantle, catmint, yarrow, etc. Chipped wood paths. The chickens have managed to expand the width of all the paths by scattering the wood chips, so I’m working this spring on dividing the plants that are already there and planting them into the paths to combat the chicken activity. 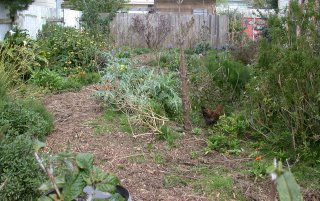 Other side of the house–lots of culinary plants. Apple trees, artichokes, rosemary and other perennial herbs, as well as lots of salvia, some roses, butterfly bush, etc. This side really gets going in mid-summer and blooms through fall. The chickens have started working their way over here too–not sure yet what the impact of that will be.

And still, somehow, there are more blank spaces to fill! So I’m off to the nursery. I’ve got some prettier, more close-up and better composed pictures I’ll post later–but once in a while, as Takoma Gardener says, you just want to see what the damn garden looks like.