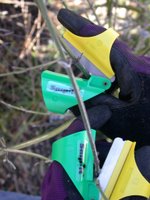 The most dangerous moments in my garden come, not surprisingly, when I have a pair of pruning shears in my hand. What is surprising is the sheer stupidity of my attempts at self-inflicted injury: I grab a bunch of dead stalks with one hand, reach in to cut them down with the other, and somehow manage to nearly slice off one of the fingers on the hand that’s holding the plant. I usually attack a plant with some vigor, so it’s a wonder I’ve never succeeded in severing half an index finger. Fortunately, my pruning shears are usually pretty dull and rusty and they don’t pose much of a threat to anyone, including the shrubs I’m working on. These close calls did get me in the habit of wearing tough gloves in the garden—not to protect myself against thorns, but against my own tools.

Not long ago I discovered a nifty new gadget that might just save my digits and make smaller pruning jobs go much quicker. A blade and tool company called Techni Edge manufactures Snip-It, a gardening scissor that slides onto the thumb and forefinger. All it takes is a cutting motion, castanet-style, to slice leaves, stems, and thin branches.

What makes this little toy so injury-proof is the two-handed technique. You buy a pair of them—they’re only four bucks apiece—and strap one onto each hand, then go after your perennials with double the fervor. With so many fingers occupied, it’s far less likely that any of them will get in the way of the blade.

I spent the morning outside, whacking away at salvia, gaura, veronica, and all the other neglected perennials in my garden that were desperately in need of a haircut. The trick is to grab just one or two stalks at a time; anything more than that will jam up the works. I found that Snip-Its were able to handle anything up to about the diameter of a pencil. It makes fast work of deadheading and light pruning, but shearing back low-growing perennials like geranium and catmint was not worth the trouble: the plants were so dense and damp that Snip-It’s small blade was not as effective as a pair of pruning shears would be.

You may want a third pair for the kitchen as well, because you can use them to keep cut flowers fresh—just pull the stems out of the water every couple of days, snip off an inch, change the water, and put them back. Using knives and kitchen scissors can pinch off the stem before making a cut, which prevents the flower from taking up water the way it should. You’ll also find that Snip-Its are useful for snipping away at kitchen herbs and houseplants.

Perhaps the reason that I like this gadget so much is that it appeals to the cheapskate in me. I can’t stand to spend money on pots or statuary or tools when I could have spent the money on plants. So a four-dollar tool that actually works is a delight. I can let it rust and fall apart and it’s no big deal to pick up another one next time I’m at the nursery. But the way things are going, they’ll probably last forever: I’m so enamored of them that I wash them off after every use, pat them dry, and even use a silver martini pick to dig out any bark or leaves that might have gotten stuck in the groove the blade fits into. The pruning shears, meanwhile, get dumped into a bucket of tools, where they will sit, covered in mud and rusting, until I come up with another job the Snip-It can’t handle.