My Garden: The Ugly Truth 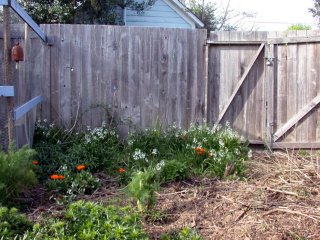 Sacramento Gardening took this idea of 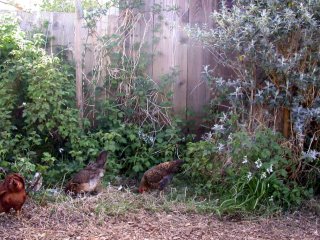 photographing the real garden, the way it really looks, even if the off-season, even with weeds, and ran with it. She actually went out and voluntarily photographed the ugliest parts of her garden.

OK, I’m up for it. Ugly Spot #1: between the chicken coop and the back gate. Gate just has chipped bark (and right now, a pile of sticks too fat to go through the electric chipper/shredder), and the coop is, well, the coop, and between those two things are weeds and some perennial Maximillian sunflowers that die back to the ground in winter. What to do? I’m thinking of hanging my upside-down tomatoes here this year since it’s a south-facing fence that escapes the shadow of the house.

Next up–a no-man’s land between the berries and the butterfly bush. It’s cute when there are chickens scratching around, but otherwise it’s weedy and useless. I guess the best idea would be to just extend the berries all the way over–they want to go there anyway. It’s a little shady down by the ground, sunnier higher up, so the berries would do OK. 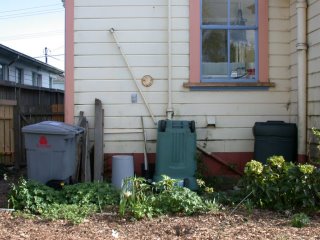 And last but not least–the trash cans! Of course! I refuse to build a cute little house for the trash cans, or even one of those “easy weekend project” trellises covered in vines. It’s trash. We all have it. I don’t care who knows it.