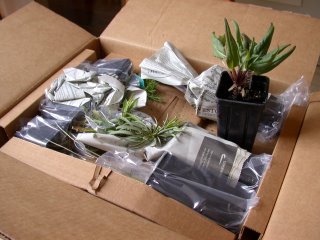 I just love it when plants arrive in the mail. First, it’s pure heaven to just be sitting at your desk, slaving away, and have the nice Fed Ex man ring the bell and hand you the box of plants you’d nearly forgotten you’d ordered.

And then it’s such a wonder to open the box and find these tiny, shriveled little things wrapped in plastic and newspaper, shipped halfway across the country, but somehow, miraculously, still alive. These are not the big, overblown plants you’d find in a nursery, force-fed fertilizers so they’ll bloom out of season or pushed to produce big, floppy leaves so the customer feels like she’s getting something for her money.

In fact, I realized as I looked at these plants that there’s no way a retail nursery could have gotten five or six bucks apiece for them. They don’t look like anything. But you know–and I know–that what they do have is a strong, sturdy root system and a good upbringing. That’s all I care about. I don’t need flowers and foliage; I can take it from here and make all that happen myself.

Isn’t it funny that nursery plants look so different from mail-order plants? Mail-order nurseries must have it made–they get to focus on growing healthy, interesting plants, not arranging merchandise to make customers swoon. The catalog does the selling for them, so the actual plants are not forced to do double duty as both sales force and–well–plants.

Wouldn’t it be nice if nurseries had one or two examples of the plant in full bloom so you could get a good look at it, but then they sold you healthy young bareroots that didn’t look like much but would save their show for your garden?

Which leads me to wonder what else retail nurseries could do for us. As long as we’re railing against magazines, garden media in general, television, and so on, let’s keep talking to the nursery industry.

I get a few magazines aimed at the nursery industry. (Most of these magazines are free to qualified subscribers; as a journalist/writer, they seem willing to send them to me.) Here are some random comments–more coming in future posts.

1. Please, please stop calling your products “plant material.” Oh, what an awful term! It’s like publishers who refer to books as “units” when their authors arent’ listening. Don’t even think it!

2. Don’t spend so much time agonizing over how to appeal to “women customers.” It’s insulting and irritating. The assumption is that male customers are the norm, and you must do something different for women.

3. Same goes for Gen X customers. Nothing irritates me more than reading comments like, “Remember, this is the generation raised on video games and TV dinners. They have short attention spans and want you to do it for them.” WHAT?

4. Don’t talk about something like container gardening as a trend. That’s not a trend. That’s putting a plant in a pot. If that’s the most interesting trend you can come up with, we’re in serious trouble.

5. Likewise for organics. Organic gardening is not a trend, it’s a very wise approach to gardening that relieves your customers of the dubious chore of pouring carcinogens on their plants. A recent industry article began by assuring nursery owners that “the term ‘organic’ itself is no longer reserved for hippies in Haight-Ashbury or a handful of people building some commune in the mountains of New York.” Wow. In one sentence, they managed to insult not only organic gardeners, but their own readers, the nursery owners who they assume are so backwater that they associate the term “organic” with hippies in the Haight.

I could go on. And I will. But it’s Friday night, and I have a date with my husband.