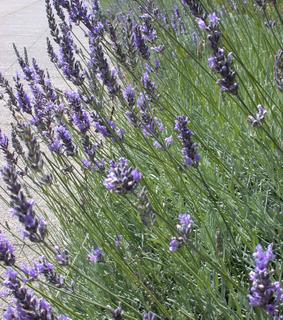 I was out running errands the other day when I heard a commercial on the radio that just about stopped me in my tracks. It seems that Ramone’s Bakery has started making lavender truffles: little dark chocolates with a center that has somehow been steeped in lavender. I wasn’t clear on the process, but just the thought of lavender-flavored chocolate was enough to make me turn the car around and head right over there.

To my surprise, they still had one or two left by the time I arrived. Perhaps I shouldn’t have assumed that there would be a run on these truffles—as much as I love lavender, it rarely occurs to me to cook with it. I certainly never would have thought about combining it with chocolate. But now I can tell you from experience that lavender-flavored chocolate is a revelation: the herb does nothing to interfere with the chocolate, but what it leaves behind is the precise experience of lavender, somehow transformed from a scent to a flavor.

I’ve always grown lavender, but I got serious about it when I moved to Eureka. I wanted a border of lavender to run around the perimeter of the garden. A neat row of lavender would, I thought, keep things from looking too haphazard. I needed over thirty shrubs to do the job right, so I did plenty of research before I placed my order.

The first thing you have to know about lavender is that there are several varieties, and it can be a bit confusing to sort them out. The variety known as French lavender, Lavandula dentata, is not widely grown in France. It is easily identified by its serrated, or toothed, edges. It has a long blooming season, almost year-round in mild winter areas like Humboldt county, but the flowers have a menthol scent that don’t lend themselves to sachets or chocolate truffles.
English lavender, or L. angustifolia, is not native to England and is more commonly grown in southern Europe. It produces the kind of sweet buds that are often used in perfume and sachets. ‘Munstead’ and ‘Hidcote’ are two of the most popular varieties of English lavender around here.
The lavender that is grown in the Provence region of France is actually an English lavender hybrid called lavandin, or L. intermedia. ‘Grosso,’ ‘Fred Boutin,’ and ‘Provence’ are the most popular varieties of lavandin. They have long, sturdy spikes of flowers that lend themselves to lavender wands and dried arrangements, and the high oil content makes them perfect for soaps and perfumes.

Another popular variety of lavender is Spanish lavender. (Please don’t ask me if it grows in Spain; I don’t know. I suppose it doesn’t.) These shrubs are generally smaller and they produce fat spikes of flowers with two or four bracts—petals—on top that resemble rabbit ears. They aren’t used in sachets or perfume, but they do perform well in small spaces, which makes them a great choice for patios and balconies. (For more on lavender varieties, check out The Lavender Garden and Lavender: The Growers Guide.)

I settled on ‘Fred Boutin’ lavandin for my lavender border. I could use the dried flowers for just about anything, and the people at the nursery promised that each shrub would grow to three or four feet tall and just as wide. It sounded like exactly the sort of muscular border plant I was looking for.

But most of all, I chose ‘Fred Boutin’ because I like the idea of growing the same kind of lavender they grow in Provence. I read somewhere that the French lay their pillowcases out to dry on lavender shrubs and let the perfume infuse them. I heard that lavender buds can be mixed with sugar and used to ice cakes or make lavender shortbread cookies. I knew that the spikes could be used to skewer whatever you happened to be throwing on the grill. I found recipes for lavender jelly, lavender custard, and lavender lemonade. And of course, one could maintain a French countryside glow with lavender facial steams, lavender salt scrubs, and lavender bath oil. Overall, it sounded like a pretty good lifestyle to me.

But since I’ve had my row of lavender, I have never once strewn my sheets across them to dry. Perhaps, being out in the country, the French don’t worry about someone walking off with their pillowcases, but I would. I’d need some errand outdoors so I could keep an eye on them until they dried. And in Eureka’s cool, foggy summers, they might never dry properly at all and have to come inside at sundown, half-damp, and finish the day in the dryer.

I have also never made lavender jelly or lavender shortbread cookies. In fact, the most I’ve done with my stalks of lavender was to hang them from the rafters in the attic and to occasionally try to pass off the bunches of dried flowers as Christmas gifts.

But that chocolate lavender truffle got me thinking again about lavender recipes. I had the right kind of lavender—English lavender and lavandin are the only two varieties that are safe for use in cooking—so I went into my kitchen and started thumbing through cookbooks, looking for a recipe that would put Ramone’s efforts to shame.Most of the recipes I found seemed far too complicated, often requiring that you steep the buds for hours or days. I was on deadline; I didn’t have that kind of time. So finally, in the name of investigative journalism, I poured myself a lavender martini: a splash of vermouth, a generous pour of gin, and a sprig of lavender dropped in like a swizzle stick.

I must confess that while the lavender smelled great, it didn’t do much to the flavor of the gin. In the end, I tossed the lavender sprig and replaced it with an olive. Hey, olives come from the garden… not my garden, to be sure—but perhaps a garden in Provence.