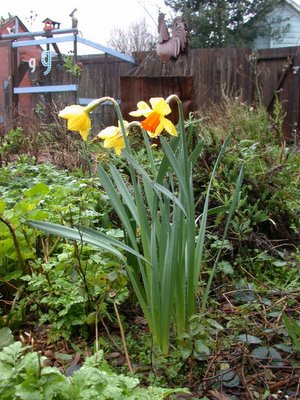 Oh, and Path to Freedom took up the challenge and posted a photo of their front garden in January. Well, yeah, sure, if your garden looks like that, go ahead and put up a picture.

If you haven’t checked out their site, now’s the time to do it. They’re homesteading on their suburban, 1/10th acre plot in the middle of bustling Pasadena, and pulling three tons of food out of the ground every year. Brilliant.

I just rented a season of the old BBC program “The Good Life” from Netflix, (distributed in the US as “Good Neighbors”) in which a suburban couple decides to go off the grid, raising chickens and goats and growing potatoes and lettuce, to the chagrin of their gin-swilling neighbors. Oh, it’s all so glorious. Biodiesel in the burbs. What’s not to like?

While I’m at it: a couple points about “The Good Life”:

1. No one has children, did you notice? I mean, that’s fine, I don’t have any either, but can you imagine a modern sitcom where there are no adorable, comic-relief children and no explanation is offered of their absence?

2. Are you catching all the really feminist comments the husband is making? You get the idea that feminism is an active issue in their marriage. Again–great, it is in mine too–but you don’t hear men (or women) talk like that on TV much now.

3. Like “Sex and the City,” do you suppose each character is a kind of archetype, a manifestation of some part of our personality? (There’s your dissertation topic, kids. No charge.) I mean, I really identify with the cubicle-quitting husband, but there’s quite a lot of the gin-swilling neighbor about me, too.