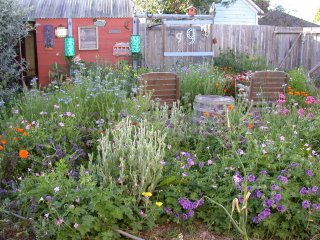 Here’s the back yard looking yummy, as it does this time of year. This is the north side of the house, which means that even though it’s an open, unshaded space, the house tends to cast a long shadow most of the year. The back, around the chicken coop, is really the only place that gets full sun all day.

I’m moving plants around a lot to accommodate the chickens these days. I want low-growing plants so that I can look out the back window and see the chickens and the coop. There’s no point growing food because the chickens would just eat it. So flowers it is, and creeping, crawling flowers work best because they’re not bothered by the girls’ scratching and digging. Hardy geraniums are doing well, as are yarrow and lady’s mantle. Rose campion, calendula, cerinthe, borage, and love-in-a-mist are prolific self-sowers, so at least some of their seeds survive the scratching and pecking.

What else? A few low-growing salvia, some centranthus, maybe a few heurchera. Half is perpetually in damp shade (near the house), and half in full sun and whatever water I think to give it, which may not be much. It’s kind of a jumble, but the chickens and I like it.