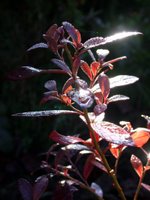 I got into blueberries in a big way last weekend. One or two shrubs hardly seemed worth the trouble, so I came home with six plants and a commitment to buy more if I could find room for them. I’ve been trying to fill one long border with culinary plants—herbs, fruit, artichokes, kale, anything edible—so blueberries fit with the theme and they were the right height for an empty spot I couldn’t figure out what to do with. Also, blueberries can tolerate a little shade, and the place I’d chosen for them gets morning shade most of the year.

This is a good time to plant blueberries, and they’re available right now at all the nurseries around here. The shrubs look good all year long, and in the fall, many varieties produce gorgeous red foliage. Just remember to pay attention to their special needs, such as:

Acid soil. Blueberries thrive in soil with a pH around 4.5. Acid soils are common in Humboldt anyway; if azaleas and rhododendrons do well in your garden, blueberries probably will, too. To ensure their success, mix half native soil and half wet peat moss when you plant. (Get the peat moss wet before you add it to the soil, otherwise you might create unexpected dry pockets around the roots.) Dig a hole that is twice as wide as it is deep; the plant’s roots will spread out near the soil surface.

If you have a pH meter and you’re sure that this peat moss/native soil mixture isn’t providing the acid soil blueberries need, consider adding aged sawdust or, as a last result, lime sulfur. Sulfur must be added to soil gradually at the rate of about 1 pound per 100 square feet. Add just a little each year, testing the soil in between, to avoid harming plants or soil organisms.

Organic matter. Because blueberries produce shallow roots, it’s very important to add plenty of organic matter, like aged compost, to the soil when you plant and to mulch heavily to protect those roots. This is a great use for fallen autumn leaves, and some leaves, such as pine needles or oak leaves, will help lower soil pH gently. Keep about six inches of mulch around your blueberries all year.

Fertilizer. Use a dry organic fertilizer that is formulated for acid-loving plants like rhododendrons. Give them one feeding when buds first begin to open in spring, and a second dose a month later. That’s all the food they will need all year. Pull mulch away from roots, scratch the fertilizer into the soil, water well, and cover with mulch again.

Magnesium. Blueberries are prone to magnesium deficiency. Early signs include bright red edges around older leaves, contrasted against a strong green color in the center rib of the leaf. To address magnesium deficiencies, try a weak foliar spray of Epsom salts and water.

Irrigation. The shrubs need good drainage and they require about an inch of water a week in summer. A soaker hose is the ideal solution for watering a patch of blueberries; the hose can be concealed under mulch and it will deliver show, steady moisture to roots near the surface. Be sure to water all sides of the plant—if you neglect to water one side of the plant, the harvest will suffer on that side.

Pruning. You won’t need to prune your bush for the first five years or so, but eventually it will require an annual pruning to let light into the plant. When the time comes, in early spring before new growth has appeared, remove old, less productive branches and thin out weak, twiggy growth. The most productive branches will be sturdy, four to six year-old canes just over an inch in diameter, so favor those and remove the rest. A mature plant might have a dozen healthy canes that will produce abundant fruit each year.

Harvest. Fully ripe blueberries are completely blue, with no pink blush, and almost fall from the plant when you tug on them. Expect to get less than a pound of fruit per plant at the beginning (you can see why I planted six), but over the years, with the right care, you may get as much as ten to twenty pounds of fruit from a single plant.

Blueberries are a long-term project; I don’t expect great rewards at first. But this time of year, I’m just grateful for the opportunity to get outside and put anything in the soil, even a collection of twigs and red leaves that hold only a distant promise of fruit.