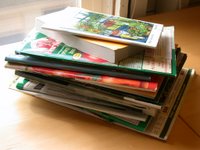 I can’t remember a catalog season as ferocious as this one. On the day after Christmas, the Pottery Barn catalogs stopped suddenly, as if a spigot had been turned off, and all at once the garden catalogs flooded in. I get two or three of them a day. It’s impossible to keep up. Where are all of these catalogs in August, when I could really use some good post-garden bathtub reading?

I get wholesale catalogs that I couldn’t possibly order from because I don’t own a nursery. (The idea of an entire endcap filled with “Starter Bulbs” or “Edible Delights” is appealing, but where would I put it?) I get a catalog for contractors that sells everything from welding helmets to buckets of 500 gloves; from body harnesses to bird control cannons (don’t worry, it only looks intimidating and makes a loud noise); from anti-theft devices for tractors to flammable liquid storage containers. Exactly what kind of gardening do the people at Gempler’s think I’m doing?

Gempler’s does have some incredibly cool stuff, however. Where else can you get a 4.5 pound tub of Bag Balm, the moisturizer beloved by both dairy cows and farm girls everywhere, for only thirty-five bucks? Or a professional soil test kit that gives laboratory-like results for only five hundred? Then, for a hundred dollars, they offer the incredible Plant Stress Detection Glasses. These glasses, which are made of red plastic, block out the green light reflected by chlorophyll and make unhealthy, stressed-out vegetation look pink or red. That’s a bargain when you consider that the soil test kit and the detection glasses, when used together, could give you all the information you need to help you decide whether or not to sprinkle five dollars’ worth of kelp meal on your flower beds.

They also sell Chain Saw Chaps, which claim to protect the wearer against runaway chainsaws. I try to avoid power tools entirely, but this just seems like one of those items that you wouldn’t know you needed until it was too late, so perhaps it’s best to just order a pair. The catalog claims that the chaps offer more protection on “the left side of each leg, where most injuries occur.” I don’t want to know any more about that, nor do I want to know about their worm-shaped Mole Killers, which are the size and texture of a worm but contain enough poison to kill a mole with just one bite. These worms, Gempler’s claims, are made with “special enhancers to ensure immediate acceptance.” They’re white, not red, but I suppose that doesn’t matter since moles are blind. (Friends, please don’t bury toxic fake worms in your garden. OK? Enough said.)

Two other garden catalogs (OK, three. No, four. Well, just make it three) rose to the top of the pile. This month I’ll be spending the grocery money on the following:

Select Seeds offers glorious heirloom flower seeds, full color photos for rainy-day reveries, and free seeds with every order. I’m particularly excited about trying mignonette (also called reseda), which is a small, highly fragrant flower that was popular as a cut flower during the Victorian era but has fallen almost entirely out of fashion. There’s also a pink milkweed that claims to have a delicious vanilla scent, and a funny little flower called Schizopetalon walkeri whose blossoms are shaped just like miniature paper cutouts of snowflakes. They produce a sweet almond fragrance and they were popular 200 years ago. You can also find more varieties of sweet peas and poppies than you’ll know what to do with, and some antique bulbs that you won’t find anywhere else.

Next up is High Country Gardens, the catalog of drought-resistant plants that thrive in Santa Fe and, oddly, also here in the Pacific Northwest. While some of these plants need heat or alkaline soil to really take off, many of them are just so grateful for dry soil in the summer that they’ll bloom their heads off, even in the fog. You’ll find a great selection of agastache (aka hummingbird mint), which produces glorious spikes of hot, tropical-colored flowers all summer long and spreads happily during our wet winters. The flowers look good for weeks on end, making deadheading unnecessary. Pair them with equally long-blooming yarrow and salvia (also available in many colors through this catalog) and you’ll never look back. High Country also offers a number of drought-tolerant grasses and other lawn alternatives, including ‘UC Verde,’ a new variety of buffalo grass that does particularly well on the west coast.

I’m usually not a fan of pre-planned gardens, but High Country does an amazing job of organizing their plants into relaxed, informal combinations for every situation. One of their plans is designed for combining roses with perennials, another is perfect for dry strips along the sidewalk, and they even offer a cold-hardy Mediterranean Garden. If you’ve got a blank slate that you’re about to fill with plants, check their catalog for inspiration.

And finally, who can resist White Flower Farm? Their plants are pricey—twelve bucks for a yarrow? Seriously?—but they do perform incredibly well. Besides, the catalog is so much fun to read, and so full of practical suggestions for combining plants and working with difficult spots, that I’m happy to subsidize their work. This year I’m in love with the brilliant kelly green ‘Hansen’s Shamrock’ hellebore and the five foot tall veronicastrum ‘Fascination’, which produces spikes of pink flowers, much like a veronica but with airier leaves that help it blend in with ornamental grasses.

Those of you who remember lily breeder Leslie Woodriff will want to check out their lily collection, which includes his ‘Star Gazer,’ ‘Black Beauty,’ and ‘Le Rêve’. Woodriff got just a sliver of the appreciation he deserved during his lifetime; I’m sure he’d be glad to see his hybrids in such a popular catalog today.

Oh, and here’s some late-breaking news: if you’re a fan of Digging Dog Nursery and were planning to order from them this year, do it now. They’re gonna be real busy in March. You’ll find out why soon enough, but just trust me on this.