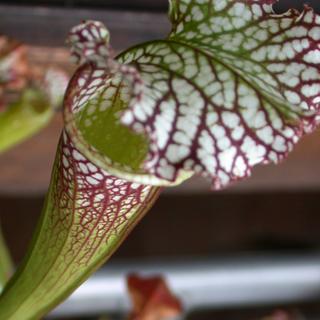 I bought my first carnivorous plant as an anniversary present about this time last year. I don’t know why a flesh-eating plant struck me as an appropriate way to celebrate eleven years of conjugal bliss, but there was something elegant and other-worldly about the plant that seemed just right.

It might not have been the most sentimental gift I’ve ever given, but according to Hallmark, that was our “steel” anniversary, and I couldn’t find anything in steel (knives? mailboxes?) that seemed particularly romantic anyway.

The carnivorous plant I chose was a pitcher plant that is native to bogs in the eastern United States. The leaves rise up in narrow flutes that collect water and lure flies to their death. The one I chose was green with reddish veins—an altogether creepy color scheme that made the plant resemble some vestigial digestive organ that you’d just as soon have removed before it got inflamed.

A single carnivorous plant is a harmless enough creature; mine sits in a sunny window and snacks distractedly on any flies that happen to wander by. But walk into OBJX, the shop in Old Town Eureka where I bought my plant, and a sight awaits you that will raise the hairs on the back of your neck and chill the very marrow in your bones: hundreds of Venus flytraps, pitcher plants, bladderworts, sundews, and cobra lilies, all reaching menacingly toward the giant copper centipede that looms over them and houses a set of fluorescent grow-light tubes.

They may never get a bite of the centipede—a cruel joke played on the plants by shop owners Kellen and Randy Perlman and local artist Wade Badger—but they won’t starve, either. Nearly every plant holds a fly or a gnat in its sticky grasp, and on a sunny day the plant table buzzes with trapped insects whose predicament is only just beginning to dawn on them.

The Perlmans started off with six plants in their shop, which also houses an assortment of peculiar and sometimes alarming artifacts that look like they’ve been hauled down from Frankenstein’s attic: antique laboratory equipment, framed locks of hair from some long-ago departed, blurry old photographs, and dead bugs in little glass jars. They figured the carnivorous plants would appeal to their customers, and they were right: demand for the plants is so strong that they are looking at ways to keep them in stock throughout the winter, when the plants would usually leave the store for a period of dormancy.

“There’s quite a carnivore culture in this area,” says Randy, hinting at a dark side of Humboldt county gardeners that I never knew existed. “There are a few kids—ten and twelve years old—who are seriously into these plants. They’re down here every chance they get.”

It’s not just kids with a penchant for odd plants who flock to the front window at OBJX. Carnivorous plants thrive in bogs, making them a good choice for perennially wet spots in the garden. Another Eureka gardener, Michele McKeegan, chose pitcher plants for her bog garden. “The garden slopes down to the woods,” she explained one day, while we stood on her sunny south-facing slope, “and everything drains down to that one spot in the lawn. I thought about putting in French drains, but then I just decided to let it stay a bog.” It’s a cheerful bog garden, with bright sweeps of black-eyed Susan and cardinal lobelia, but the pitcher plants rise out of the dampest regions and lend it a swampy and mysterious aura.

You can get a carnivorous plant garden established outdoors in Humboldt county as long as the area is wet all year, even in summer. They like acid soil, appreciate peat moss, and will do best if they get some sunlight but are protected from harsh afternoon rays. The California pitcher plant, Darlingtonia californica, thrives along the Darlingtonia Trail in the Smith River National Recreation Area. The trail begins near mile post 17.9 on Highway 199; it’s a two-mile loop beginning at the west end of the parking lot. If you’re considering a bog garden, it would be worth visiting this natural bog for inspiration.

Carnivorous plants will do just as well indoors if you don’t have the space or the conditions to grow them outside. The requirements for each plant are a little different, but in general they need a good source of sunlight (or artificial light) and they should be situated in a tray of water to mimic bog conditions. Plan on keeping a jug of rainwater or distilled water around for them: the minerals in tap water will harm them over time. Most carnivorous plants require some period of dormancy, so if you’re growing them indoors, plan on taking them outside around Christmas and returning them indoors in March. If temperatures get much below freezing where you are, try an unheated room like a garage instead.

Each carnivorous plant employs a different strategy for luring and digesting bugs. Bladderworts live in the soil and suck tiny insects into bubble-like traps when their trigger hairs are touched. The traps reset themselves within about thirty minutes, making them extraordinarily voracious plants.Butterworts put out tiny violet-like flowers whose innocence belies their carnivorous nature. The leaves produce a slippery ooze that lures fruit flies and gnats to their death. Digestive enzymes excreted by the leaves breaks down the bodies of the insects, leaving nothing but empty carcasses around the plant.

Venus flytraps are perhaps the most familiar carnivorous plant; their trap leaves open and excrete a sweet nectar that attracts insects. Once the prey wanders inside the trap, it springs closed and glands on the insides of the leaves begin to excrete digestive juices that drown the doomed bug. (You can force a trap to close empty by running a finger along it, but this is considered highly rude in the carnivorous plant community.)

Pitcher plants are perhaps the showiest of all carnivorous plants, growing up to a foot tall and producing gorgeous, orchid-like blooms. Insects wander into the flute of the pitcher plant, attracted to the nectar it produces, and drown in the digestive juices that fill the lower regions of the plant. If you’re in Eureka and you’ve got the stomach for it, stop in at OBJX and see if Kellen still has a pitcher plant “autopsy” on hand: one trumpet-shaped leaf, cut lengthways, containing a ghastly mass grave of dead flies. Oh, and in case you’re worried that a few carnivorous plants on a window sill are going to turn your life into a scene from Little Shop of Horrors, never fear: most carnivorous plants don’t require a steady supply of insects to survive, and they never eat raw meat—or fingertips.