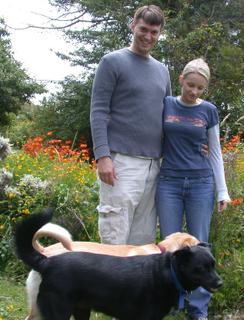 Janis Eastman-Moore contacted me a few weeks ago about her garden in Eureka. She’s planning to get married there next August, but the place is completely overgrown with weeds. She doesn’t have much experience gardening, and on top of everything else, it’s a rental. She wanted to know if I had any ideas. I like nothing better than telling other people what to plant, so I headed over there last Sunday to check it out.

Janis and her fiancée Scott Grant have lived for a couple of years in a small house near College of the Redwoods with sweeping views of the ocean. They’ve got an enormous backyard filled with fruit trees, roses, orange crocosmia, and a few other plants that are half-buried under the weeds. Because they’re both going to school and working, whatever they do has got to be affordable and not terribly time-consuming.

Here are my suggestions for making over a garden in time for a wedding that’s twelve months away. If you’ve ever tackled a project like this, write to me with your ideas and I’ll print them in a future column.

Stick with what works. Take good care of the larger, more established plants that aren’t going anywhere. A nursery can recommend organic products to fight pests and diseases so there aren’t tent caterpillars dropping on the guests’ heads during the ceremony. The garden’s full of neglected roses; many of the same biological products that work on fruit trees will be effective on the roses, too.

Clear out the rest. If the landlord allows it (and who wouldn’t?), offer to pull out what doesn’t work and replace it with something even better. Anything that can’t be removed—maybe a shrub whose flowers don’t match the color scheme—can at least be cut back so it’s more of an insignificant clump of leaves on the big day. Pull weeds and bring in a truckload of compost to pile on the flowerbeds. Once the overgrowth is cleared away, it’ll be easier to make a plan.

Use a simple color scheme. The bride wants yellow, and lots of it. She’d already figured out that to really make yellow pop out in a garden, it needs a contrasting color like purple or blue. There are lots of pink roses and some pink fuchsias in the garden, but they’ll look fine with yellow and purple/blue flowers.

I suggested that they limit themselves to a few plants that were easy to grow and bloomed over a long period of time, and plant those in mass quantities. Easy yellow plants might include lady’s mantle and ‘Moonshine’ yarrow, and, for contrast, catmint and ‘Johnson’s Blue’ geranium. All four of these plants are so prolific that Janis and Scott might have friends who would be willing to divide their own plants and share the extras. (Whoever you are, friends of Scott and Janis, this is a hint).

For height, it’s hard to beat the tall purple Verbena bonariensis, which puts up spikes of purple flowers on thin, wiry stems, creating an airy effect that won’t block the view of the rest of the garden. Dill or fennel flowers would also add some height and yellow blossoms, as would yellow hollyhocks, but it would be important to get a true “annual” hollyhock that blooms in the first year—otherwise you’ll end up with biennials that won’t bloom until your first anniversary.

The bride was particularly fond of the cutting of yellow ‘Honeycomb” buddleia I brought. With only a year to go, it would be a challenge to nurture this plant into a full-sized shrub, so I suggested spending a little extra money here and buying the shrubs in large, landscape-sized containers. Most of the rest of the plants will be available in affordable four-inch pots, so the buddleia would be the place to splurge.

Fill in with containers. Containers are another place to splurge because, as renters, they’ll be able to take them when they move someday. Containers don’t just belong on decks and patios—by placing them out in the garden they can add some height and some charm. Use logs, stones, cement blocks, or upside-down wine barrels as the base, then set a container on top and fill it with flowering plants the weekend before the wedding. (Simplicity is the key here, too—it’ll look much more coordinated if every pot is filled with the same one or two plants. Most nurseries can special-order extras with a little advance notice.)

Use high-impact foliage. Since it’s nearly impossible to make plants bloom on cue, I suggested using lots of gorgeous foliage in between the flowers. They already had a couple of silvery artemesias, so it makes sense to add more of those. The soft silver or pale green foliage of helichrysum would work well, as would the large-leafed peppermint scented geranium or some good-sized euphorbias, all of which are also available in inexpensive four-inch pots.

Feed with care. It’s easy to get over-excited and feed a garden so much that you burn it, but a monthly dose of dry organic fertilizer is critical. The established plants can use a balanced, all-purpose food now, and there are transplant formulas available for the new plants. The roses should get organic rose food, and the fruit trees need a special fruit tree formula. Scratch it in around the base of the plants and water well. Lay off during the coldest months of winter, then resume in spring. About six weeks before the wedding, switch to a “fruit and flower” formula that will help push everything into bloom.

Water, weed, and deadhead. Plants need steady water to be able to take up nutrients and grow. This is not the time to put your garden to the test and see what kind of abuse it can stand. Water regularly, pull weeds, and keep cutting flowers. The garden will start to look gorgeous in June; it’ll take real discipline to cut back the flowers to encourage another round of blooms in August.

Expect the unexpected. Anybody who’s ever tried to time a garden to bloom for a wedding knows that gardens have minds of their own. Some flowers will bloom a little early, some a little late. Welcome to married life; it’ll be the first of many things you can’t control. My words of wisdom to the bride: You get to pick the day, you get to pick the dress, and best of all, you get the pick the guy you’ll spend the rest of your life with. But when it comes to the garden, just give it all the love and attention you can, then stand back and let it do what it wants to do.

In fact, that approach works with husbands, too. Good luck to you both.