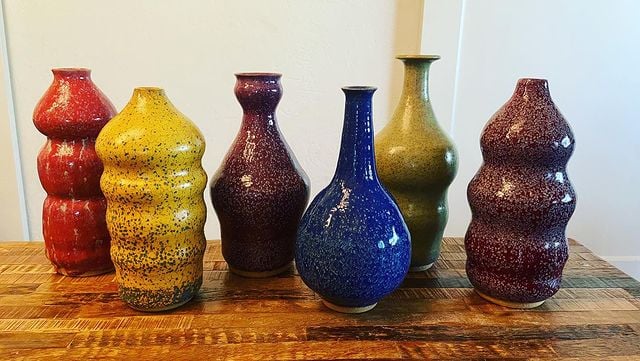 Seth Rogen is probably the only ceramicist to have 8 million Instagram followers. He got into ceramics the way many of us get into art–by following his interests, his enthusiasm, his curiosity. If you scroll down his Instagram feed, you’ll see that he’s a longtime collector of ashtrays–don’t laugh! They’re really interesting ashtrays!–and then he went to a pottery studio and made something, and then, being Seth Rogen and having all the money, he had his own studio and kiln built, and now there’s no stopping him.

He takes the most wonderfully pedestrian approach to his art. When he posts a new piece, he generally says something like, “I made this thing and I like it.” When he made some pots he wrote, “I made these pots and planted these plants in them.”

In this lovely interview he says, “I do like tactile things; I like to produce tangible work. With movies, we spend years on them and then they’re very intangible. They don’t have weight, they don’t occupy a physical space. You used to at least get a DVD or a Blu-Ray, and you don’t even really get that anymore. I don’t like to keep my own movie posters around because those are just advertising for the product, not the product itself. I do really like being able to create an artistic expression that is a thing that I can pick up, hold, show to people. It is just so different from what I normally do which has no mass to it.”

In other words, he’s doing it because it scratches an itch for him. It’s personally satisfying. He’s obviously not trying to build a business or win any awards. He says, “It’s been fun because I can just explore and play around and try different things. If something turns out terribly, it’s not ultimately damaging to my overall reputation as a ceramicist.”

Be Seth Rogen, everybody. Just go make your pots. Explore and play around and try different things, and don’t worry about your overall reputation as a ceramicist, which is just another thing that has no mass to it.