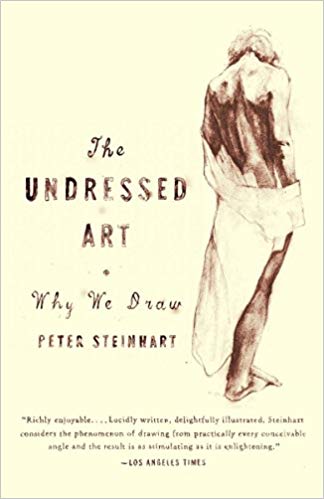 I can’t stop thinking about what I read in the last three pages of Peter Steinhart’s memoir The Undressed Art. If these lines speak to you…congratulations. You’re an artist.

This was the first passage that stopped me in my tracks:

“What does one feel that leads one to light out? A restlessness? A sense that one does not fit in? A desire for revision? A sense that somewhere else life could be better? All these seem to me to be the field marks of creative personalities.”

Wait. Not fitting in? A sense that life is better somewhere else? It’s tempting to label those feelings as unhappiness. It’s tempting to try to stop feeling that way, because you might be happier if you didn’t.

But…what if that restlessness is neither good nor bad, but simply the outlook of an artist?

He goes on to define artists as “dispersers”—people who are drawn to the open road, to new experiences and fresh faces. “Nondispersers” are the people who want you to stay put. Read on:

“There are places in which it is hard to live with a disperser’s outlook. There are always nondispersers arrayed against whatever spaces an artist creates. There are always people who cling to tradition and view this wanderlust, this desire, this questioning and restlessness, as a threat to the smooth operation of society.”

Here’s where he really gets going. Does this speak to you?

“Artists tend to end up in cities, especially in cities of unusual liberality. Art centers like New York, Paris, and San Francisco are cities that have been settled and built largely by dispersers, by people who didn’t fit into the more rigid social structures of small towns and autocratic rules, by people who left their birthplaces voluntarily because they felt, like Richard Jarrett, that there was something better ‘out there.’ People who could sympathize with and tolerate idiosyncrasy, confusion, muddled thinking, and visionary chaos, because they believed that in doing so we can learn to live with our own irrationality and unpredictability, our own shame, our own desire. That out of this muddle, out of the errant lines and blurred form and imperfectly read values, come possibility and hope. And sometimes, too, a clear and reassuring light. A picture that goes from form to feeling. A picture that envisions humankind in a fresh and promising way. A new space.”

He doesn’t ignore nature as the wellspring of creativity, either. I’ll leave it to you to find the entire passage, but it begins:

“A naturalist goes into nature also looking for hope, for insight, for something that reassures and clarifies. We see nature not as something to be dominated or transformed, but as the original whole.”

It is true, of course, that New York, Paris, and San Francisco were built by dispersers but have now been purchased by a global wealthy elite, rendering these cities unlivable for artists. We have been robbed of our creative heritage, of the places we built. I can’t fix that in a single blog post. (Yes I can: High taxes on vacant properties, second homes, and luxury rentals, plus laws requiring full transparency on all real estate transactions so that investors and money launderers can’t hide behind an LLC, plus a basic social safety net that includes universal health care, elder care, child care, robust public transit, and free college.)

That aside, I’d argue that the “visionary chaos” of old New York, Paris, and San Francisco will spring up anywhere the dispersers disperse to, whether that’s Detroit, Mexico City, or Marfa, Texas.

If this is you—if you’re tired of feeling that there’s always something better out there, and if you wonder what’s wrong with you for always longing for the next thing—I would say this:

That longing isn’t a bug, it’s a feature. Congratulations, you’re a disperser. You’re an artist.