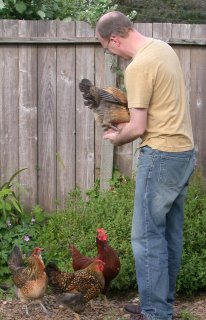 Scott comes outside and finds himself surrounded by a flock of very demanding girls. Bess, as always, flies right up to his face, just assuming that he’ll hold out an arm as a landing perch about the time she arrives.

In other news…Dolley laid one of those strange shellless eggs the other day. It was just like what happened with Bess. She looked really uncomfortable, would hardly move, and then (not in her nesting box, just out in the garden, which is very unusual) out came this weird thing. It broke on the way out, so first came egg white, then yolk, then this rubbery membrane which Eleanor grabbed in her beak and ran around with in the garden in a sort of victory lap. Scott watched the whole thing and was quite horrified. (we took the rubbery thing away from Eleanor–you do not want chickens to develop a taste for eggs. In fact, they tried to gobble up the bits of white and yolk still on the ground. What were they thinking? “Hey, look what came out of Dolley’s butt. Let’s eat it.”)

Fortunately, Dolley felt better immediately (wouldn’t you?) and went back to laying eggs with shells a day or two later. The only real health risk here would have been if she seemed to still have egg bits inside of her, but fortunately we didn’t have to go exploring–seems like it all came out on its own.