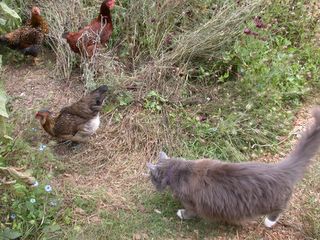 Just another day in the garden–Loretta is keenly interested in the chickens. He spends all day out in the back, laying near the run where he can keep an eye on them. And when they are out running around, Loretta usually makes some half-hearted attempt at jumping them. (It’s not clear what he would do if he caught one.) I think he likes the noise and fuss they kick up when he gets near, but I’m not so sure they like it. Usually I get tired of Loretta’s antics after a while and I put him inside so the girls can enjoy the garden in peace.