Update on the brooder situation 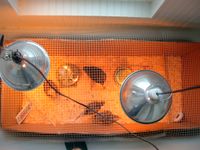 They’ve been on pine shavings for several days now (they were on newspaper covered in paper towels for the first 2-3 weeks of their lives) and although they do still nibble at the shavings, their little digestive systems seem to be in working order and the whole thing is so much easier to keep clean–basically, they bury their droppings and we add a little fresh shavings every now and then. We used two lights to deal with the possibility of a draft on cold nights, but that’s not going to be necessary pretty soon, either.