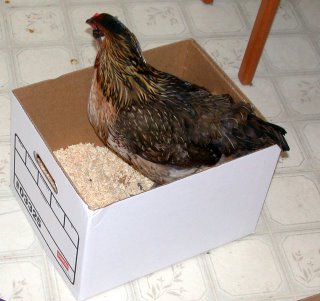 Well, after a couple of weeks of Dolley’s crop being enlarged, we decided to take her to the vet. It might just go away on its own, but if she went downhill in a hurry, we’d probably regret not having it checked out. Besides, we thought it would be helpful to get to know a chicken vet.

There’s one bird vet in town, so that’s where we went. I worried that they would think we were crazy for bringing a chicken in, but in fact they were delighted and, like all good vets, acted as if ours was the most beautiful and well-behaved bird they’d ever seen.

In fact, Dolley was very well-behaved. She squawked a little when we put her in the box, but once the lid was on she rode very quietly, and in the examining room she perched on one of our arms and hardly made a peep.

The news looked grim at first–the vet thought that the lump in her crop felt very hard and fixed, like a tumor, and her droppings looked tumor-like. So they ran a few tests on the droppings and gave her an x-ray (we did not get to watch this to see how they’d pull it off, but she said they would “mesmerize” her and it would only take a minute, which it did. How do you mesmerize a chicken?)

The x-ray showed that the mass was probably just food that wasn’t moving through her system, so she prescribed a drug called Metoclopramide which is supposed to get the crop moving and push things along. They also found coccidia in her droppings–this is a very common protozoa that chickens are mostly immune to once they get older. There are many different species of coccidia with many different symptoms. For that she prescribed an antiobiotic, and recommended that we put all the birds on medicated feed to make sure everybody stays healthy. (Baby chicks are always on medicated feed because they are less resistant to the coccidia, which flourish in droppings.)