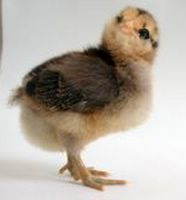 This is little Bess, the baby of the group. Even though she and Dolley came from the same batch, we think she’s only 6 or 7 days old at this point. She’s also an Araucana although her markings are different. She sleeps a little more than the others and sticks to herself more. She also tends to get squeezed out when everybody eats, although this is partly her fault considering that the feeder has about 10 openings and they all fight over the same two or three. Although she’s small, she’s surprisingly feisty–Abigail bullies her, but sometimes she’ll sneak up on Abigail and peck her in the butt when she’s not looking. She’s also a daredevil–she attempted flight long before she had a single wing feather to speak of.