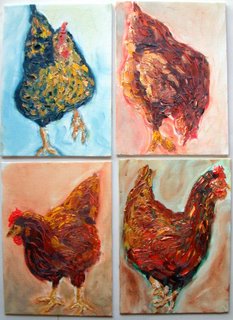 These are all Eleanor except the one that’s Abigail. Little 5 x 7 paintings I did all at once in one evening’s session as part of a local artists’ challenge. (I’m just a student, as you can see, but it was fun to participate…15 little paintings in 30 days…)

Someone asked how I know whose egg is whose. All four birds lay different eggs. Eleanor’s (Rhode Island Red) are dark brown, a little reddish. Abigail’s (Golden-Laced Wyandotte) are light brown and kind of skinny. Bess and Dolley are both Araucana mixes and their eggs are similar–Bess’s are greenish and small and round (like her) and Dolley’s are a little less round and a little more blue.

We know who lays which egg because they all started laying at different times, and we’d watch which hen was going in and out of the nesting box as if she was about to lay–so it was easy to tell, when an egg appeared there later, that it was hers.
I imagine that if we had four of the same breed it would be really hard to tell the eggs apart.

In other news: Dolley is losing some of the soft little feathers on her butt. It seemed to happen all at once. No sign of mites, so I suspect picking. They had to spend the day cooped up yesterday (literally) and I think it happened then, out of boredom. I hadn’t noticed it before today.

Poor girls. I’ll keep an eye on it. The feathers that Bess lost on her neck are growing back.