Here is Dolley, contemplating the 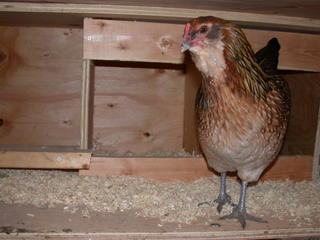 Here is Dolley, contemplating the nesting box. She’s the next one to lay, we think. She’s been assuming the “mating” posture for about a week now. Our little girl’s growing up.

We have a friend in our neighborhood who also has chickens, and we sometimes swap chicken-sitting duties. She pointed out that since their chickens came to them from a farm as adults, they may have some kind of who-knows-what that our chickens don’t have. (or it could be the other way around, for that matter.) A disease, a parasite, a mite, anything. So she said that when they come take care of our chickens, they are going to wear different shoes so they don’t track in any little chicken bits from their coop.

What a good idea. I never would have thought of that. We try to be careful with chicken sanitation, but that is so very sensible. It’s probably something I should have considered when we went to the country fair last weekend and came in contact with hens and all kinds of other livestock, but it just didn’t cross my mind. The things you learn as an egg farmer.