Fortunately, the rest of the

Posted by Amy Stewart on November 6, 2005 in Chickens 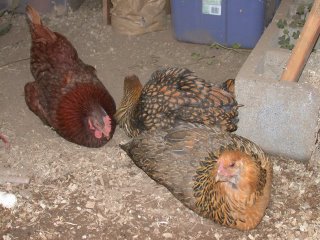 Fortunately, the rest of the shed (the part not screened in as their chicken coop) has a dirt floor, so they have this one small dry space where they can take a dust bath. The dust baths are supposed to prevent mites, and mites are more of a concern in the winter, so it’s more important than ever that they get to do this.

Speaking of mites, if you look closely you can see that Bess is still missing some feathers on her neck. I was worried that she had mites, but there are no signs of them. Someone suggested that maybe the other birds are picking at the feathers on her face when she’s in the nesting box and they want her to get out so they can use it. (There are two boxes, but one of them is, for some reason, better than the other and they all want to use that one.)

Anyway, a few of the feathers are growing back in, but we’re keeping an eye on it…