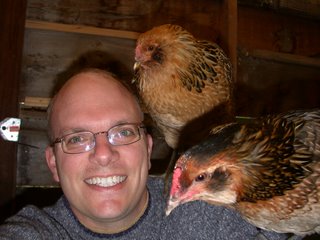 United Poultry Concerns has declared May 4 International Respect for Chickens Day. I know that their name sounds like the name of some industry puppet group, but in fact, this is a group that advocates for better treatment of chickens even as they are being raised for slaughter. Good people. And here are some random highlights from their press release:

For International Respect for Chickens Day, educators, students, office workers and activists are encouraged to do an ACTION for chickens – everything from showing the movie Chicken Run to setting up a school library display to leafleting on a busy street corner.

A Minneapolis group is holding a Most Beautiful Chicken Photo contest. (No, I could not find it online. Dang.) (Update: Thanks to Molly for this link.)

“Chickens are lively birds who have been torn from the leafy world in which they evolved. We want chickens to be restored to their green world and not be eaten.”

The idea for International Respect for Chickens Day traces to famed Le Show host and star of The Simpsons, Harry Shearer, who proclaimed Sunday, May 14, 2000 – Mother’s Day – National Respect the Chicken Day because hens are justly praised as exemplars of devoted motherhood.

In Letters from an American Farmer, a study of American colonial society published in 1782, St. John de Crevecoeur wrote about chickens, “I never see an egg brought to my table but I feel penetrated with the wonderful change it would have undergone but for my gluttony; it might have been a gentle, useful hen leading her chickens with a care and vigilance which speaks shame to many women. A cock perhaps, arrayed with the most majestic plumes, tender to his mate, bold, courageous, endowed with an astonishing instinct, with thoughts, with memory, and every distinguishing characteristic of the reason of man.”

Chickens are sentient creatures and have feelings of their own.