Eleanor and the Matrix 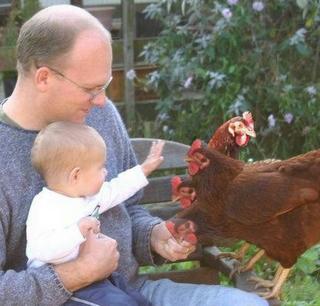 This just in from Scott, whose voice is heard all too rarely on this blog. (Not to mention his digital photo editing skills. Freaky.)

I recently had a revelation that chickens are from the Matrix, the setting of the films of the same name. As if it’s not enough of a superpower to lay an egg 300 days a year, chickens are like a real-life Neo and Agent Smith. As you’ve seen from the blog photos, chickens are in constant motion. It turns out they have great eyesight, too, and tremendously fast reflexes.

When Lucas was here, the hens hopped up on one of the outdoor chairs to join us. Little Lucus, just eight months old and very interested in the chickens, waved his arms about wildly, trying to touch them. Eleanor and Abigail eyed him carefully and gently bobbed in and out, hardly seeming to move, staying millimeters beyond his flailing fists.

I thought of this scene from the Matrix. Compare the photos and see for yourself. One is Agent Jones, the other is Eleanor. Like Agent Jones, Eleanor turned her head around to check things out with her other eye, a common chicken strategy.

I guess with their fast bird metabolism, they viewed Lucas in slow motion and easily dodged the random baby movements.

Fortunately, in addition to a fast metabolism, they share another characteristic with all their avian cousins: bird brains. Or we all might be in trouble.