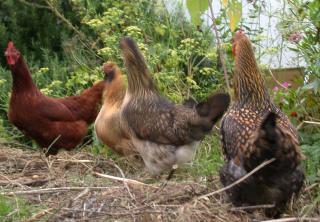 It’s impossible to get a picture of them all standing still, but at least I managed to get them with their heads in the air (a noise had just startled them) instead of their standard beak-to-the-ground, tail-in-the-air posture.

They’re starting to wander into our side garden, something we hadn’t allowed previously. They might make a mess, but little Bess goes after the snails with such a deliberate viciousness that I can’t resist…