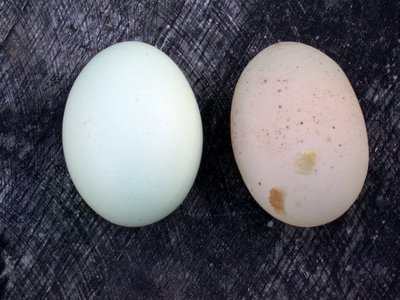 Actually, it’s a no-shelled egg. The one on the left is a normal egg from Bess. The one on the right is what she produced today. (the spots are just dirt from us handling it.) It’s surrounded by a membrane that’s about the consistency of latex, but more fragile.

Bess was acting like she was feeling bad this afternoon–all puffed up, not moving much, kind of a strange posture–and I was afraid she was eggbound. (this would have meant that she had an egg inside of her that she couldn’t get out. It’s a dangerous condition and the home remedy involves warm oil and a gentle massage you-know-where.)

But eventually she went into her nesting box and produced this. She did seem to feel a little better afterwards, but she went back to the box for a while as if she had another one. Nothing came before nightfall, and she seemed to be feeling well enough that I put them to bed as usual. (If I really thought she was sick, I’d bring her in and we’d spend the night in the bathroom–me and Bess, that is. Scott usually thinks I overreact to things like this.)

As far as I can tell, sometimes a chicken lays an egg without a shell for no reason at all. Sometimes it’s a vitamin D deficiency, and it’s certainly true that they haven’t seen the sun much lately–until today, that is. I added a little poultry vitamin solution to their drinking water just in case.

Oh, and if you were wondering–an egg forms from the inside out–first the yolk, then the white, then the membrane, then the shell. So that’s how an egg can come out without a shell–something went wrong with the process right at the end. I also recently learned that eggs come out pointed end first, until they reach their final turn in the track, when they spin themselves around and emerge into the world rounded end first.