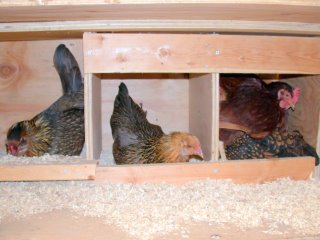 Four hens trying to lay at once! It rarely happens that the Egg Stork arrives at the same time for all four of them, but when it does, it’s chaos. We have two nesting boxes (each bird does not need her own box; they usually take turns and besides they develop a preferred box) and as you can see, the box on the right is the box everyone wants to use.

Abigail was there first, and that didn’t stop Eleanaor from just settling in on top of her as if she wasn’t there. Bess got box #2, to the great chagrin of Dolley, who was left 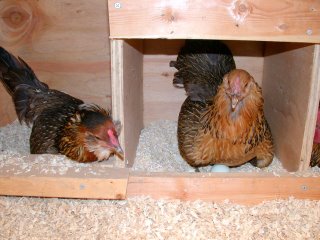 in a sort of “waiting room” next door. Scott snapped this photo the very second Bess laid her little green egg, and as you can see, Dolley is already poking her beak around the corner as if to say, “Are you done in there yet? Move it!”

Eventually everyone but Abigail laid an egg. Maybe she just gave up in disgust.