This is so brilliant, folks. Thanks to Brian & Enis for sending a link so I could share it with you. Terry Bradshaw’s the other guest, and he may be the funniest part of the whole deal. 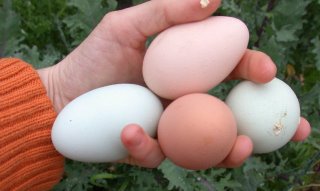 And if you’re in the mood for some truly fancy organic dyed easter eggs, (I know, Easter is over, this information would have been useful a week ago), check out this great article on all-natural egg dyes made of spinach, berries, cabbage and more.

Oh, and someone asked what chicken scratch was. Good question! It’s a mixture of hard, whole grains like corn and wheat that chickens absolutely love to eat. You can’t feed it to them all the time–this is like candy to them, not a balanced meal–but as a bribe or a reward it’s great. I think the reason it’s called “scratch” is that you can toss a handful of it on the ground and they love scratching around for it. We use chicken scratch to round the girls up after they’ve been free-ranging and put them back in their run. They will follow a handful of scratch anywhere. 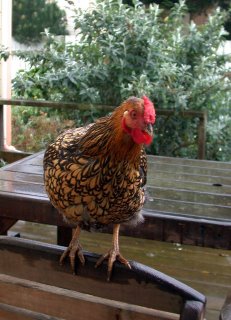 She’s so eager to do her trick. The trick is simply that she hops from the back of this chair onto your arm for a treat. Unlike the smaller birds, she can’t get herself off the ground (or, as Scott says, she can but she doesn’t try hard enough…), but she has figured out how to do this. Anytime I go near the deck, she runs over and hops on the back of the chair and looks at me hopefully. It’s a little heartbreaking somehow. Of course I am unable to resist and she manages to con me out of quite a bit of chicken scratch this way.

I totally want one of these. Don’t my girls deserve an airy, lofty A-frame?

Find out more at The Easy Chicken. They also sell lots of interesting poultry supplies. It’s actually a good thing I don’t have much time on my hands, or I’d be shopping for them, drafting up architectural plans, and most of all, cruising the feed stores to look at the baby peeps, all of whom want very much to come home with me. 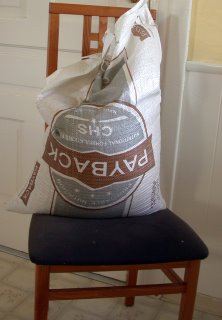 So I’m at the feed store picking up another bag of organic layer pellets. There’s only one store in town that offers the organic stuff, so I make a trip out there every couple of months for a bag. This time the woman behind the counter says, “We have organic scratch now, too.”

Well, that’s great! I’d asked about organic scratch before and it hadn’t been available. But apparently I wasn’t the only one asking for it, so they contacted their supplier and now they’re carrying it. She seemed so pleased that she’d been able to respond to the needs of her customers. That’s why we support small, local businesses, right?

So I said sure, I’d take some organic scratch, even though we had plenty at home. I was expecting a little 5 or 10 pound back, which is what I usually buy, but when I went out to the car, they were loading this in the trunk.

“Uh…don’t you have it in little bags?” I asked. I have four hens and they get a small handful of scratch as a treat once or twice a day. It takes forever to get through the little bags.

“Nope!” the guy loading my car said cheerfully. So I just smiled and closed the trunk, then drove home wondering how many years it would take to get through this bag, much less where I would put it in the meantime. Anybody need some scratch? I’ve got plenty to spare. 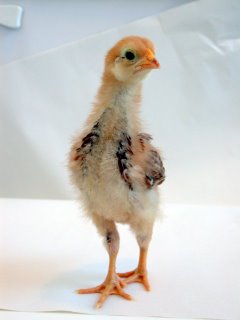 I was at the feed store last week admiring the new crop of baby chicks and it was all I could do not to stuff a couple in my coat pocket and take them home. Here’s a little trick that will melt your heart: walk up to the brooder at the feed store and cluck at them like a hen would. Fifty baby chicks will come running towards you, pushing their beaks through the wire and peeping, “Are you my mommy?”

I wish I could share this woman’s appearance on Jay Leno, which my aunt June e-mailed to me, but I don’t have a way to post a video on the blog and I haven’t found it online yet. It’s about the funniest piece of television you’ve ever seen. I’ll keep looking.

Meanwhile, you can meet Boo Boo and his rescuers here.

Thanks to Roni for this one: a circuit board made of chicken feathers and soy. Yeah, we just build electronics with whatever we’ve got laying around the house. (get it?)

Apparently ” the chicken feathers make it faster because they have a higher dielectric constant, which means the electrons running around the board will not have to fight with the board to get from a to b. The less electronic interference means faster point to point communication. Also, the thermal coefficient of expansion is lower, so less stress is placed on components once the board heats up (it does not expand as much because keratin expands less than glass/poly resin).”

Man, this chicken thing is complicated. Dolley recovered perfectly from her impacted crop (if you’re surfing around for crop info, check the February and March 2006 archives), but about three weeks later, we saw Return of Big Crop. I had heard that once a crop gets stretched out, it’ll stay that way, but this time instead of containing a hard mass, her crop was softer and full of liquid, like a water balloon.

This could be a sour crop, a problem caused not by a blockage but by some sort of ailment. Antibiotics can bring on a fungal infection; for that you feed them yogurt or medicate. But it also could be bacterial or even some kind of virus.

One thing you can try is to gently turn the chicken upside down and try to get her to puke up everything in her crop. This sounds like a strange and ill-advised exercise, but yesterday we did try turning her mostly upside down and pushing gently on the crop. She tolerated it, but nothing came up.

There are also Espon salt flushes and molasses flushes, where you mix one of those ingredients with water, force it down their throat with a dropper (making sure not to get it in their lungs), and maybe that helps move everything through. But we have not had much luck forcing things in her beak, and the whole idea of putting the dropper far enough in her mouth to make sure the water didn’t go down her windpipe just seemed scary.

Adding vitamins and electrolytes to their water is another recommendation–that’s easy. I bought a little packet at the feed store and they’ll all get vitamins for a couple weeks.

Feeding them yogurt is another easy recommendation to try. They all like it, and it’s good for them. One lesson learned: never try to hide medicine in a food you want them to eat again later. Dolley was very wary of the yogurt at first because of vivid memories of the recent past–but she did eventually eat some.

We’re also going to make an extra effort to keep their coop clean. Dolley’s got watery droppings, too–the vet did see coccidia, little protozoa that live in their droppings, under the microscope, and prescribed antibiotics which we were never able to get down her. They’re supposed to develop a natural immunity to coccidia, but with this wet weather, it could really flourish and overwhelm their immune systems. We’re reluctant to medicate because you are supposed to let them build up resistance.

So: extra-clean coop, yogurt, vitamins. Fortunately she’s acting normal, so as long as she’s not showing any other signs of illness, we’ll watch and wait. Any other ideas?

You go, Martha! For a while I was worried that Martha Stewart had lost her enthusiasm for the obscure and difficult, and was instead going for least-common-denominator tips and recipes to appeal to the masses. No more! Now we’re blowing out eggs (using a drill, of course), and filling them with melted chocolate that must be kept at EXACTLY 88 degrees while it’s being drizzled into the eggshell.

Woo-hoo! I will NEVER do it, even though I have four of Dolley’s lovely blue eggs all hollowed out because we decided not to eat them while she was on medication–but I will think of it, dream of it, and wish I WOULD do it! That’s what I need Martha for!